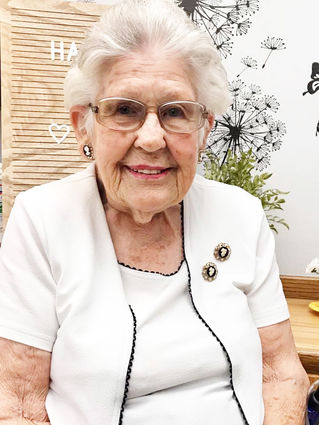 Martha May Pleninger, 89, passed away due to natural causes on Tuesday, July 14, 2020, at Benefis Medical Center in Great Falls. Cremation has taken place, and graveside memorial services and a community fellowship reception will be held at a later date. Martha's family has suggested memorial donations be made in her name to the Big Sandy Medical Center or the Big Sandy Historical Society. Holland & Bonine Funeral Home has been entrusted with services and arrangements. Please visit Martha's online memorial page and leave a message of condolence for her family at http://www.hollandbonine.com.

Martha was born on May 12, 1931, in Iliad southeast of Big Sandy to Charles and Viola (Keeney) Lohse. She was raised there, attending Iliad Country School through the 8th grade. She attended high school in Big Sandy, living in the girls dorm her sophomore year and then behind the Big Store with Mrs. Giebl. At this time she worked for the McNamara's. Her Senior year, Martha met Stanley Pleninger at Carsaw's and the couple was married two years later on June 1, 1949. They made their home on Stan's family farm 32 miles outside of Big Sandy, raising five boys. She and Stan ran the farm until 2005, when they retired, spending winters in Big Sandy and summers on the farm, until Stan passed in 2007. After that, Martha lived at their home in Big Sandy until moving into the Big Sandy Medical Center in 2016.

She was a kind and high-spirited woman,"spit-fire", who enjoyed staying home with her family, cooking large meals, tending to her flower and vegetable garden, but some of her favorite pastimes were putting together jigsaw puzzles, beading, playing with her grandchildren, and an especially good game of pinochle.

She was preceded in death by her husband, Stanley Pleninger; son, Keith Pleninger; and parents, Charles and Viola Lohse.