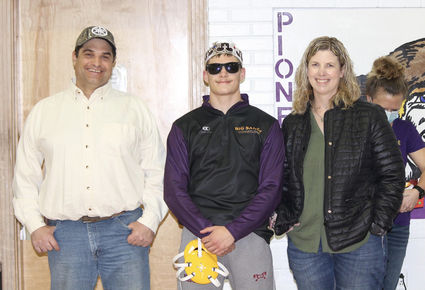 Senior , Bayley Genereux with his parents, Austin and Raelynn Genereux.

Big Sandy High School wrestlers get one opportunity a year to perform in front of a home crowd and let the light shine on their efforts.

The Pioneers, accordingly, made a grand entrance Thursday evening.

"This year, we did the walkout," said senior Bayley Genereux. "That was fun. Having the home crowd here, that's nice. It gets you a little more adrenaline going."

Genereux has staked out a 14-7 record in his final season, aiming to get back to the state tournament and get a win after appearing last year.

That includes Thursday's opening victory by fall in 2 minutes, 22 seconds against 145-pound John Ocenosak of Great Falls Central Catholic after jumping out to a 7-0 lead on points. In his second match, Genereux nearly went the distance before being pinned in 5:25 by Tristan Stygles of Class A Havre.

The Blue Ponies, GFCC Mustangs, Chinook and Chester-Joplin-Inverness visited Big Sandy, which participates in a co-op with Fort Benton for wrestling.

Genereux and senior classmate Brady Pleninger were honored before the mixer, escorted by proud parents and each recognized for their commitments to military service upon graduation. Genereux said wrestling is helping him get in shape in anticipation of U.S. Marine Corps basic training in June in San Diego. Pleninger completed U.S. Army basic training last summer and is set to begin advanced individual training (AIT) this summer.

Pleninger, 8-7 for the season, said he is pleased with his progress "for how long it's been since I wrestled last."

He pinned the Mustangs' Nathan Anderson in 38 seconds for starters Thursday in the 205-pound weight class but lost by fall to Preston Nitschke-Love of GFCC in 3:22 after going up 2-0 with a first-round takedown.

Genereux praised coach Tucker Taylor, who took over as head coach for Fort Benton-Big Sandy this year, and is assisted by Connor McKillop of Fort Benton.

"He throws hard matches at us," he said, noting he went 1-1 in the previous meet Jan. 26 at Lewistown. "I got thrown on my head in one and did well the next, pinned the kid."

Both seniors have been impressed by their freshman teammate Reinhard Bold, 11-5 this season, including a 2-0 mark in the home mixer.

"Instead of foam blocks, Reinhard got wrestling mats when he was little," Pleninger laughed.

"He's always in the weight room every morning," Genereux said. "He works on his ranch. He's dedicated."

Bold defeated Stygles at 145 in a 5-2 decision before wrestling up to 152 and earning a technical fall by an 18-2 count in 2:59 against the Blue Ponies' Mason Wilting.

Bold said he has wrestled consistently since kindergarten.

Bold is hopeful about placing in state as a freshman, setting a high bar for the future.

"I just like to improve and improve every year, always," he said.

Bold also senses he has gained from Taylor's approach to wrestling the best. He gritted out a full 6-minute match at Lewistown against the Golden Eagles' star Cooper Birdwell, an undefeated three-time state champion who has committed to Division I powerhouse Oklahoma State. Birdwell claimed a 16-3 decision.

"You learn a lot, feel how they move, critique yourself," Bold said. "(Taylor) always says you've got to learn from the best."

"If I'm just throwing my guys in where I think they're going to win all the time, they don't get better," Taylor said. "The more tough guys you wrestle, the better you'll get (and) always try to give them a better match the next time. You learn a lot more from that loss than some easy win."

Taylor relished the best spectator turnout he has seen in three years at Big Sandy and the life lessons his sport can impart.

"It is a combat sport. It's a grind. You learn so much about yourself," Taylor said. "You are going out there toe-to-toe, nobody else to blame (for mistakes). There's a lot of people ... that don't have the courage to go out there."

The coach is glad to have a dozen athletes in the gym between the two schools. 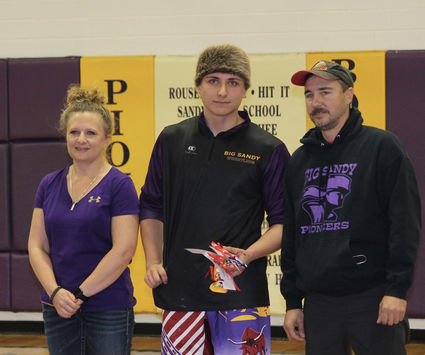 Senior, Brady Pleninger with his parents Heather and Scott Pleninger.

"It's a rivalry for all other sports but I love it," Genereux added. "We're like a family."

The Montana High School Association added girls wrestling this year and female grapplers from Havre, Chinook and CJI were the first to compete at Big Sandy.

Taylor said he heard from some Big Sandy girls they might be interested but none turned out this winter.

On the same day as the Big Sandy home match, MHSA officially moved state wrestling tournaments out of their usual home at MetraPark in Billings and combined divisions for a "superdivisional" to qualify. The state meet for Fort Benton-Big Sandy is now slated for March 5-6 in Shelby.