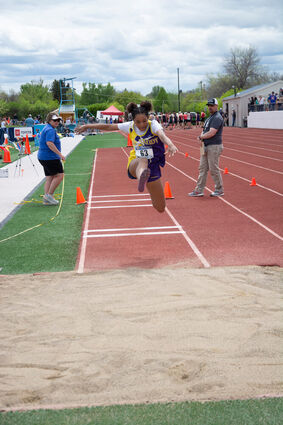 Malaysia Baumann, made it to the finals in her Triple jump.

State track is a powerful experience for athletes. The large stands are full and the fans loudly support every attempt. Even the last one in the event is clapped for. Usually ever athlete is pumped up and doing their best. Sometimes the stress just makes their muscle fail them. They'll be back next year. Big Sandy did well. An older gentleman who has been involved in track, told me "if you make it to state you are better than over 100 other athletes in that event. Imagine that we have 16 superior track athletes.

The other 4 X 100 relay members were Lainey Terry, a sophomore, Jai Baumann, and Carmen Tan, both freshmen.

In the other relay, the 4 X 400 Big Sandy Pioneers came in 16th in a time of 4:35.12. They ran 9 seconds faster-making it their best race. The team members were freshmen Kaya Demotiney, Eva Yeadon, and juniors Mattie Gasvoda and Angela Sant. 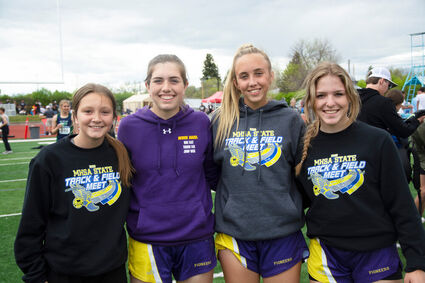 Eva Yeadon took 6th place with a high jump of 4'10". She was the highest scorer for the team.

In the triple jump Junior, Malaysia Baumann made it to the finals with her record jump of 32-09.5.

Junior Kody Strutz placed 8th in the Triple Jump with his record of 41.01.

Sophomore Cooper Taylor placed 12th in the Javelin with a throw of 137-08.