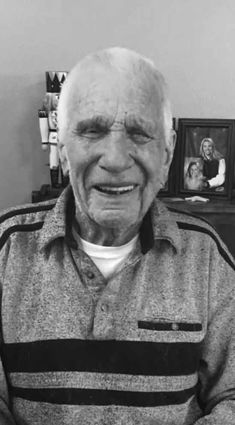 Angus, grew up in Bossburg, Washington and as a teenager worked in the mines. He attended Marcus High School but was unable to attend his graduation as he joined the Army on April 11, 1941. Angus was a part of the 41st Rainbow Division from Fort Lewis and was stationed at Seward Alaska when Pearl Harbor was attacked. Angus was later stationed at the Alleutian Islands including Adak and Sagma where Angus helped to build an airstrip. Later, Angus was also with 205 Coast Artillery and Patton's 3rd Army during the Battle of the Bulge. He was honorably discharged October 16, 1945.

Angus met Ruth Rutledge from Hopp Montana at a Pie Social at the Grange Hall out of Colville, Washington. He bought her Coconut Cream pie in October 1945 and they were married March 2, 1946. Angus and Ruth moved to Hopp Montana in March 1947. They left Washington where flowers were blooming and came to the family farm where it was 30 below zero.

Angus had no idea how to farm but he stayed and made it his life's work with his father-in-law Lester Rutledge being his teacher. He especially loved harvest time.

As a young man, Angus always played on a baseball team as a pitcher for the Big Sandy Bobcats in 1947 and he was especially proud when they beat the Malmstrom baseball team. Angus played, pitching again, for the "Over 30" softball league in Big Sandy.

Angus had numerous hobbies one of which was working with wood, especially Juniper from the Missouri river breaks, which he turned into beautiful lamps.

For 15 years, Angus rode his Yamaha Venture in the Lawman 1000 and then the Lawman 500. He was recognized on two occasions for being the oldest rider. He also rode for Project Hope.

Angus and his sons enjoyed bull elk hunting season in the Western mountains of Montana and deer hunting in the Missouri River Breaks. He also enjoyed camping trips and fishing with his mother-in-law Jennie Rutledge. They always had a competition who would catch the first fish and who would get the most fish.

Angus was active in the Big Sandy Methodist church including 23 years as MYF leader and in the Methodist Men's Group. He was also active in the Farmers Union and on one occasion assisted with the driving of a bus to Washington DC with a delegation.

Another great interest of Angus' was vintage Winchester rifles. He was involved in gun shows for many years winning "Best of Show" awards several times. Many lasting friends were made at the gun shows.

Angus enjoyed and was loved for his sense of humor as he was a master prankster.

Angus was the last surviving member of his immediate family. He was preceded in death by his parents, Luther and Hattie Post Merrill, his brothers Douglas, Luther, and Everett, sisters included Virginia, Thelma and Shirley. Also, half brothers and sisters Bill, Ivan, Lucille and Leona Brewington. He was also preceded in death by infant son, Roger Albert.

Memorials can be made to the Montana Make a Wish Foundation, the Big Sandy Methodist church or the memorial of one's choice.

Services are still pending and will be announced at a later date.