Even in FWP Region 6, Please be Bear Aware 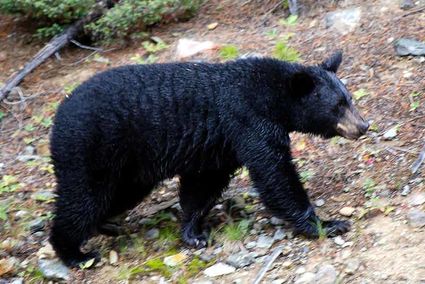 Montana Fish, Wildlife and Parks would like outdoor enthusiasts to be "Bear Aware," even in northeast Montana. Although bear encounters are rare in most of FWP Region 6, black bears are occasionally seen in the Little Rockies and the Bears Paw Mountains. Recently, one black bear was found near camping areas on the south end of Beaver Creek County Park in the Bears Paw mountains south of Havre.

Many times, bears are attracted to campground areas and homes due to the garbage produced and the availability of food. However, if bears are going to become a local wildlife species that we can all enjoy, we need to be smart about living with or near them. This includes preventing situations that habituate bears, such as rummaging through garbage and exposure to other unnatural food attractants.

It is unlawful to intentionally, or to inadvertently, feed bears. When bears access garbage and other food sources, they can become food-conditioned and potentially be dangerous. Once a bear is food-trained, it is often impossible to un-train them. That is why biologists so often say: "A fed bear is a dead bear."

Wildlife officials often must euthanize food-conditioned bears in the interest of public safety, a situation that everyone wants to avoid. A much better option is to prevent bears from becoming habituated in the first place.

FWP reminds folks that live or camp in areas where bears might be to always:

• Secure garbage inside a garage, secure shed, or vehicle

• Bring pet food in at night

• Bring in bird feeders, and clean up spilled seed

In addition, hunters and other recreationists are reminded to properly store game meat, food, livestock feed, garbage, and all other attractants in a bear-resistant manner. This also discourages other wildlife, such as raccoons and skunks, from causing problems with your belongings as well.

There are many resources available to hunters and recreationists on ways to prevent bears interactions, some of which can be found at: fwp.mt.gov/fishAndWildlife/livingWithWildlife/beBearAware/.