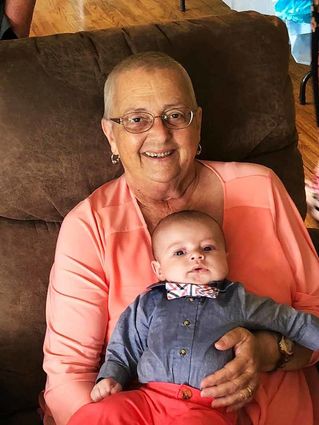 Kimberly Ann (Robinson) Sheehy passed away on August 23, 2018, at the Big Sandy Medical Center. Kim was 61, having been born on March 13, 1957, in Detroit, Michigan, to Alfred and Elaine (Ayotte) Robinson.

Kim grew up in St. Clair Shores, Michigan, and graduated from Lake Shores High School in 1975. She attended Michigan State University on a National Merit Scholarship, graduating in 1979.

Throughout high school and college, Kim worked at McDonalds. In 1980 she came to Montana to visit her sister, Janet Runnion, and look for work. After a short time with Northern Montana Hospital, Kim became the first store manager for the new McDonalds restaurant built in Havre.

Kim married Tom Sheehy on September 10, 1983. To this union were born two children, Jessica Sheehy, who resides in Mankato, Minnesota, and Jonathan Sheehy, who lives at Big Sandy. Kim continued to work at McDonalds until 1989, a year after Jonathan was born. A short time later the family moved to the mountains, first living in a mobile home on the Runnion ranch, and eventually building a home in 1997 on the Sheehy ranch.

It took Kim awhile to adjust to life in Montana, and then to living out in the country. She is remembered as saying that when she first came to Montana, she could not believe there were no lights on the highways. And driving on gravel roads, especially in the winter, was a challenge. But as the years went by Kim conquered the roads and the environment, making many trips to town to take her children to all the activities in which they were involved.

Kim was a voracious reader, with lots of trips to the library. When books became available on-line she was an early purchaser of a Kindle. Kim also liked to cook, making many gourmet meals for her family, friends, and visitors. No one ever went away from Kim's table hungry. Kim was also involved with Big Sandy Activities for over 20 years and served as chairman of the board. She obtained a master's degree in counseling in 2002 from Montana State University Northern, and worked for a short time in the Fort Benton school system. Kim also worked for a time in the Grocery Store in Big Sandy where she enjoyed visiting with members of the community and the occasional light-hearted banter with those who shared her sense of humor. In later years she made many meals for her mother-in-law, Laura Sheehy, helped Laura with her home and yard, as well as taking care of her own yard and garden, paying the bills for the ranch, and generally helping on the ranch with the cattle and parts runs as needed.

Kim's pride and joy were her children. When she was diagnosed with a very aggressive small cell carcinoma in her lymph nodes in November, 2017, her greatest wish was to survive long enough to see the birth of her grandson. That wish came true on April 19, 2018, with the birth of Connor Sheehy. Though her cancer took a substantial toll on her, Kim immensely enjoyed and cherished the many opportunities her daughter-in-law Jessica provided her to be with Connor.

Funeral services will be held at St. Margaret Mary's Catholic Church in Big Sandy at 10:30 a.m. on Thursday, August 30, 2018. Memorials are suggested to Big Sandy Activities, the Big Sandy Medical Center, or the Havre Sletten Cancer Center. Holland & Bonine Funeral Home has been entrusted with services and arrangement. Please visit http://www.hollandbonine.com to leave a message of condolence for her family.