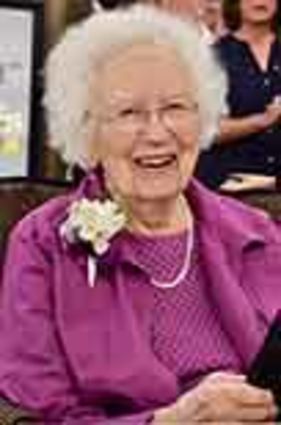 Margaret Grubb passed away of natural causes on November 2, 2018. She was born on April 22, 1918 to Martin and Mary (Franz) Balazic at home in Big Sandy, Mt. Her birth was attended by Dr. Worstell and Mid-wife Mrs. Mc Donald. She grew up on the family farm in the "Dirty Thirties" with her 5 brothers and 2 sisters. Life was challenging for everyone. The children worked as soon as they were able.

Margaret attended grade school and high school in Big Sandy graduating in 1937. In her senior year she was voted Prom Queen. She went to Bozeman for a week where she participated in typing and earned a letter. After graduation she went to Missoula to visit her sister Anna and husband George. There she meet her future husband Joel "Jody" Grubb. They married June 12, 1938. She worked at St Patrick's Hospital for a while. They moved to Hot Springs where Jody found work as a garage mechanic. They moved to Big Sandy after Margaret's mother passed away in 1942. They lived with her brother Mick until they found work at George Schlack's farm and eventually moved to Virgelle. Jody ran the Greely Grain Elevator for a few years. They then moved to Fred Schlack's farm and eventually took over her brother Mick's farm.

Margaret worked as a nurse's aide at Sande's Nursing Home. She was always interested in nursing and then went to work at the new Big Sandy Medical Center in 1967. She then drove to Havre to attended a waiver course and passed her state boards earning her LPN degree in 1968. Margaret worked at BSMC for 25 years and was voted employee of the year in 1982. She also did Home Health Care.

Margaret enjoyed bowling and attending many State tournaments. She started keeping score in the1950's, retiring in the early 2000's because she didn't want to miss the show "Dancing with the Stars"!

Margaret volunteered at the Big Sandy Museum, Big Sandy Activities and the grade school. She also loved doing crafts. Hobbies included baking, knitting, crocheting, embroidery, reading, gardening, canning and making her famous walnut roll. She enjoyed meeting her friends every morning for coffee at the Big Sandy Senior Center. She attended many athletic events and activities that her kids and grandkids and great grandkids were in.

In 1997 Margaret took a trip of a lifetime to Slovenia with brother Frank to visit their parents homeland. They also visited brother Joe and his late wife Connie who were living there at the time.

Margaret was a life-time member of St. Margaret Mary's Catholic Church where she was honored at the 100th Year Anniversary. She was honored on her 100th birthday on April 22 and was presented a proclamation by the town of Big Sandy that made her very proud.

Margaret moved into the Big Sandy Medical Center in January of 2018 and thoroughly enjoyed her time living there, especially playing the game Rummikub and beating Lisa and Reggie! She also enjoyed spending time with her Golden Girl friends: Frances Ostrom, Shirley Pearson and Martha Pleninger and all the residents.

She was preceded in death by her parents, two sisters, four brothers and her husband.

Funeral services will be held on Friday November 9th at 11:00 am at Saint Margaret Mary's Catholic Church in Big Sandy.