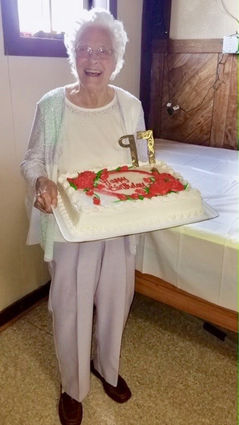 Celebrating birthdays is always fun, but gathering from far and wide to celebratIng a wonderful auntie's 97th birthday is extra special! This article is "old news" because the party took place in mid-August. Nonetheless, even though my Aunt Dicky (Jappe) Foss has not lived in Big Sandy since she graduated from high school here in 1940. She has always kept up with news from her "hometown" through the Mountaineer. So, I knew she would get a kick out of reading this. Dicky lost her twin sister Alva, better known as Happy, to Alzheimer's in 2015. Since that time, Happy's two daughters, who also live in Livingston, have been striving to keep up with all of Aunt Dicky's gadding. The three of them make a full weekend out of their visits up north, paying their respects at the Big Sandy Cemetery, having lunch at the Mint, supper at the Duck Inn, and going to garage sales around Havre and the Hi-line on Saturday. They have brunch at nephew Larry and Marj Jappe's on Sunday before stopping at niece Marla and Jim's farm on their way back to Livingston. Dicky is in incredibly good health and good shape, mentally and physically, looking forward to attending Homecoming 2020 next June. We "younger generation" members all laugh about how if we have a question about some long lost relative from the past or even the present, we know to go to Aunt Dicky for the correct information. How she keeps track of everyone, names, and dates, etc. is beyond all of us, especially as she uses no social media except her good old-fashioned hand-written letters. Her infectious laugh and just plain "joi de vivre" make her a pleasure to be around. Alma (Jappe) Foss, nicknamed Dicky as a youngster, has been coming back to Big Sandy to celebrate her August birthday these past three years. Meeting at the Mint for a noon meal is only natural as Dicky's Uncle George Jappe was the cook there several decades ago. Now, Larry Jappe's family runs the place (grandson of her cousin Lawrence). Guests joining Dicky for a brief visit, cake and ice cream, lunch, pictures, and the works included her relatives: her nieces Joanne (Eller) Barthuly and Lorraine (Eller) Lende of Livingston, nephew Pat Eller of Meridian, ID, nephew Larry Jappe and wife Marj of Havre and their granddaughter Lindsey Siebrasse of Helena, nephew Lenard Jappe and wife Nancy of Big Sandy, niece Joyce (Jappe) Olson of Chinook, niece Marla (Jappe) Ray of Big Sandy, nephew Monte Jappe of Havre, niece Lana Larson and husband Mike of Riverton, WY, nephew Chris Larson of Big Sandy and his daughter Meghan of Butte, Maureen (Sternberg) Selon of Big Sandy, Judy (Bush) Pleskac of Great Falls, Alma (Lanning) Terry and husband Glenn of Big Sandy, Reggie Jappe of Big Sandy, and Deece Lohse of Havre who was married to Dicky's cousin Ramona Jappe. Childhood neighbor and longtime family friend Luke Ophus and daughters Nora Grubb of Big Sandy and Karolee Pearson of Great Falls, as well as Wilma Welty of Big Sandy, stopped by later for a visit. Dicky had so much fun she's already planning to do it all over again next August, Lord willing!