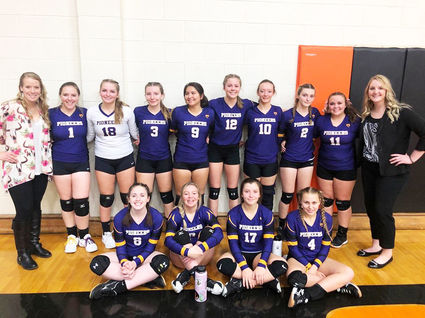 In a remarkably effective team-bonding exercise, the Big Sandy Lady Pioneers all went as Cinderella for their Halloween party this year.

What a party it turned out to be, the 6C East district volleyball tournament hosted by Chinook High School on Halloween night.

While the Pioneer netters did not literally don ball gowns and glass slippers for the event, they busted the October/November bracket just like the legends of March Madness. With wins against foes Chester-Joplin-Inverness and Box Elder - each of whom had defeated the Pioneers twice in the regular season - and a third victory this year against Hays/Lodgepole to complete a season sweep, Big Sandy finished third at the event and advanced to the divisional tournament starting Thursday at Cascade.

"I think that we finally were able to just put everything together," said first-year Pioneers coach Brittany McKenney. "Everybody kept saying, 'We're right there' ... and we finally did it. We said we can't just be (close), but we have to really be there. We wanted it really bad, and finally, we were doing all the little things right."

The fifth seed among six squads, the chalk would have had the Lady Pioneers bow out of the tournament in the minimum two matches of the double-elimination format.

Good thing there were erasers.

"I think all of us were just really happy that's who we played first," McKenney said, adding her girls were energized and motivated to avenge the prior week's Senior Night defeat.

The win moved Big Sandy into the heady territory of the semifinal match. The host Sugarbeeters, who went on to win the tournament, would not be denied, though. Chinook won 25-13, 25-15, 25-22. Bjornestad led the Pioneers with six assists and tied Gregory, Allderdice, and Laynee Ophus with three kills each. Allderdice also had a pair of blocks, and Cline managed 23 digs.

Bumped to the consolation bracket for Friday, Big Sandy faced the reality of another nugget of wisdom tossed around come conference tournament time: it is difficult to beat the same team three times in the same season. While Box Elder got tripped up trying to do just that against the Pioneers, Big Sandy made it look almost effortless. In a loser-out contest against sixth-seed Hays/Lodgepole, they prevailed 25-12, 25-12, 25-10. Ophus put down four kills, and Cline had six digs and Allderdice another pair of blocks. Wortman, Bjornestad, and Amiya Griffith each had three aces. Gregory and Bjornestad both tallied seven assists.

In the most riveting match of the tournament, Big Sandy gutted out a high-stakes, high-pressure, high-scoring win against the Hi-Line Hawks, 25-19, 21-25, 19-25, 25-18, 15-12. As the victors, the Lady Pioneers clinched a slot in the divisional round of the playoffs and at least another week in their season. C-J-I ended its season with the loss.

"It was a battle for sure," McKenney said. "It was a very emotional match."

She said players and parents alike hung on every point and were driven to make good on a preseason goal of extending the season to divisional.

With the season on the line, fittingly, the seniors stepped up. Seanna Demontiney led Big Sandy with 11 kills, and Gregory had 16 assists. Cline recorded 45 digs and Allderdice, a trio of blocks. Bjornestad, a junior, added a pair of aces.

"Amanda, she had a great tournament," McKenney said, with opponents verbalizing to the coach "that she is really killing it back there."

For seeding purposes, the Pioneers got a crack at North Star, who had fallen to Chinook in the championship match. By a 25-13, 25-11, 25-10 win, the Lady Knights secured the second seed from the 6C East while Big Sandy took third. Griffith had five kills, and Gregory had six assists. Cline recorded 20 digs.

Fresh off playing their best volleyball of the season at the ideal time, McKenney said Big Sandy enters its divisional opener at 9 a.m. Thursday in Cascade with some confidence. Their opponent, Power, took two of three sets from Big Sandy in a tournament earlier this season but has since lost a key player.

"It's nice playing a team we have at least seen before," McKenney said.

The Power-Big Sandy winner faces Belt at 4 p.m. The loser plays a loser-out match following the conclusion of the Belt match. If Big Sandy wins either of its two matches on Thursday, the Lady Pioneers will play Friday afternoon again.