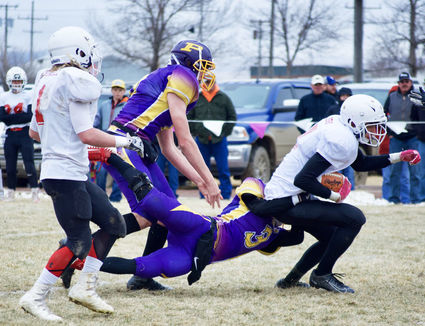 Senior, Elijah Wagoner, takes down an Outlaw in Saturdays game,Pioneers move on and will take on Jordan next week.

Big Sandy football got over a major hump Saturday in its state quarterfinal win, 60-6 at home against Roy/Winifred.

It is the third consecutive season the Pioneers (10-0) reached the second round of the 6-man football tournament and unlike the last two seasons, these Pioneers are moving beyond it.

Star running back Kade Strutz averaging first-down yardage on each carry, picking up 150 yards and five touchdowns on his 10 rushing attempts, helped Big Sandy to advance. So did Clint Darlington's 2.5 sacks that helped hold the visiting Outlaws (6-4) to a net zero yards on the ground. The Pioneer...