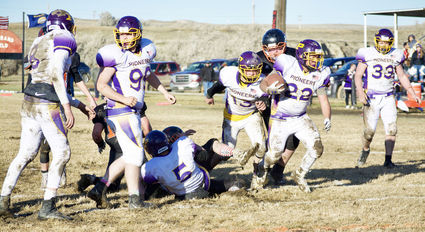 The 6-man football state tournament could still have a Hollywood ending this weekend.

The Pioneers' final scene in this year's production faded to black (and orange) on a windswept and muddy field Saturday in the heart of Garfield County.

The stars of the afternoon matinee were the host and East Division champion Jordan Mustangs (11-1) from the opening curtain to the final credits in a 55-25 win.

"They played great defense. They had a great plan, and they went through with it," said Big Sandy junior running back Kade Strutz, tipping his hat to...