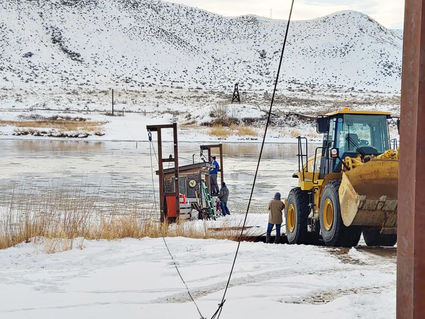 Well, Hunting season is over, and the hills and roads have become settled once again. I can walk outside to watch the beautiful rising sun and hear the geese getting ready for their flight up to the fields for the day. I can listen to a car driving on the roads above the valley; I can hear this for miles. You can even tell if it is coming or going, with the end of hunting peace and quiet is reinstated. As I sit out drinking coffee greeting the morning, these sounds always give me comfort and joy. It is time I praise the Lord for the beauty, my neighbors, my friends, and family for the rest of the day.

Along with the end of hunting season came the closure of operating the ferry. I haven't been able to watch many of these events for many years, because I was teaching the following week after hunting season and Thanksgiving. This time was a sight I had planned to capture on camera. What I had envisioned and what happened are two different things. The county crew arrived with the standard equipment (a gigantic front-end loader CAT, and a road grader). The county crew all come together to form a plan. As I am walking down to find the safest place away from the action to video the removal, I notice that all the crew members are new this year except their leader, they have minimal experience taking the ferry out.

Steven "Thor" Bergren walked over to me and said, "I helped put the ferry in this spring, so I assume taking it out is the reverse process." I stated, "It's not quite the same, because you have lower water and the ice is a big factor." Thor proceeds to ask me to take the ferry out into the slushy iceberg floating river to break it loose from all the shore ice. I commented, "I don't think it's a good idea! All the ice upstream is going to fill in where the ferry is sitting, and we are NOT going to get to shore again." I look at the other side and know if worse came to worst, I could take the ferry to the south side and land. Someone would have to drive around and get us. I thought I am sure glad it's a beautiful sunny day to wait for a ride on the other side. No more stalling! We head down to move the ferry. It starts fine, but it was frigid, so it didn't want to move much. The ferry is being squeezed on both sides by vast sheets of ice, and where it sets in the river, it only has a couple of feet of water under it. The front end of the ferry was frozen to the bottom. I thought, "OH, GOOD! We can't move it. They will have to pull it forward." As I was thinking this Kody "Laser" Cator is driving the road grader down on the ferry to help break it free. He puts the front end on the ferry. Nothing happens. Once again, I am thinking, "I want off this! Moving the ferry is not a good idea." The grader eases on farther this time.

The ferry jerked and started to separate from the shore. I yelled, "Stop get back as fast as you can before it moves out any farther, and your tractor will be in the water." This happened once with a local farmer's tractor and round baler. I had to get my neighbor to bring his big equipment to pull him out. GREAT Neighbors are a blessing! They have been a savior many times. The grader made it back to land, and Thor and I were heading out to the middle of the river, not too bad, the ice sheets coming down weren't massive at the time, only three-four feet across. Ok, I want to go back to shore. Icy water scares me!

Maybe because my family has witnessed what it could do to someone in seconds, my brother Bill fell off the end of the ferry into icy spring thaw when I was just a little girl. My dad saw it happen and yelled for help as he took off running down the shore, shouting instructions to my brother to keep afloat - the current carried him down the river just like one of the sheets of ice. My brother had a big army coat on that filled with air, helping him float. My dad sees hyperthermia is setting in. He jumps in swimming out to my brother and grabs him. He starts to swim back with him. We all begin to cheer. The excitement was too soon. My dad began to struggle with swimming and pulling my brother in the cold icy water. He starts to lose his momentum. We begin to worry again! As we are praying and encouraging my dad to keep coming, our dog Laddie started to swim out to them. She grabs my dad's shirt and drags both my brother and dad to shore. By the time we got back to the house, an ambulance was waiting to take them to the hospital. I don't even know who called for an ambulance to this day. We were all out on the shore watching an event I pray never to witness again. The story about Laddie, saving my brother earned her an award, the gold star of honor. Her arrival at our home was one of those things in God's plan. My dad was in Big Sandy after one of his long days trapping the Missouri River. He and my uncle Harold stopped at the Club Bar to warm-up with Pete, pull tabs, and buy us kids candy bars. When he came out, someone had put three black lab puppies in his truck. He found homes for all but Laddie. She became a real friend to all of us. She was there watching us kids to keep us out of trouble. With seven of us, we were always thinking of things to do. Her life was cut short by a mad ferry customer. My mom told this car full of people that their vehicle would not go on the ferry, and the water was too high. She could not take them across. They screeched their tires backward and started up the road, just where the ditch starts Laddie came out, and we all watched the car swerve and hit her. We were all crying and running to her. She died that afternoon. It was also the day her medal of honor arrived.

I digressed, Thor and I are out in the middle of the river with ice sheets floating at us. Visualize a flat smooth tin deck with melting snow on top. It is as slick as grease in a cast-iron skillet. The snow helps you stand. The sheets are starting to get huge! One is coming at us the size of the ferry. The icy layer crashes into the ferry with the force of the current; it raises the starboard side out of the water. We are scrambling to stay upright on that slick deck. We are grabbling for railing, anything substantial. In seconds this sheet of ice passes under the ferry.

I said, "I'm out of here! We are going to the shore!" Oh, wait! We can not get back to shore. It filled in. We were only five feet or so from shore so close. I backed out again, hoping to slam the ferry into it enough to break it loose. I couldn't get enough power yet. I think the drive oil was too cold. It just didn't want to take off with the horsepower it usually has. I came in again to ram the ice blockage. I got a little closer. I went back out and dropped my ramp some to push the ice block as I went force ahead. The speed helped, we were a few feet away. I said, "We could walk the plank to get off. I have a plank on the outside upstream edge." Laser brought the plank over the ferry railing, and placed it down, just reaching the shore. Everyone off except me, I had to stay with the ferry being the captain and all. Big sheets of ice were coming down again, crashing into the side. We were waiting for Pete "El Jefe" Jerrel to bring a bucket of gravel to drag the ferry onshore.

Out into the middle again to try and avoid some of the big sheets coming in, and to give the ferry a little more swinging motion when one hit us. I waited for the gravel to be placed over the rebar sticking out of the cement ramp. Then full steam ahead, the ferry oils were warmed up, and throttle power was much better. No stopping until we get to shore. I yelled, "We are coming in Hot, be ready and hold on!" to Thor. We broke through the ice jam in the ferry landing girth and brought it to shore. As I walked off the ferry, I stated, "I am done! When you start jerking cables, I am off." By coupling the cable to the ferry, a tug of war started.

Then up to the pully rigging again to release the changes. The pressure on the chains from the shifting cable now can be a problem. You are up in the air 10 feet standing on a 4X4 metal bar trying to pull these wedged chains off. My hat is off to Laser and Pete on a job well done. Once this feat is complete, the task of removing the ferry is an easy pull. Pete organized the dozer and grader to pull in sync. Pete was guiding the dozer driver (Thor), and Tracy took her lead from Pete to guide the grader driver (Laser). One more season is completed. Ferry operation will resume in April 2020.