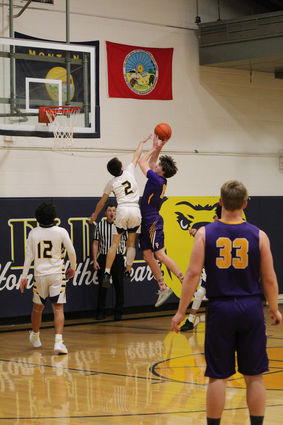 Senior Clint Darlington (15) shoots to score during the face off with the Box Elder Bears Friday.

For one half of basketball, the Big Sandy Pioneers exorcised their frustrations Saturday on an overwhelmed opponent.

Having dropped their last three games - two of which were by a combined eight points - the boys in purple and gold looked determined to blow the doors off North Star.

Jumping out to a 22-5 advantage, suffocating Big Sandy defense prevented the Knights from scoring until 3 minutes, 44 seconds had elapsed. Pioneer senior Ryan Roth had already scored in double digits by the time the guests had gotten halfway to that benchmark as a team. Roth led all scorers with 18 points for the evening.

To add to the fun of it all, the game represented Big Sandy's first crack at the team that derailed their postseason hopes with an upset at last season's district tournament.

Yet their experience in that game probably foreshadowed the difficulties the Pioneers would face in the second half. Trailing 27-13 at halftime, the Knights narrowed it to a one-possession game with 2 minutes, 29 seconds left on the clock in the final period. Senior Austin Hansen connected on one of his two free throws to draw the persistent North Star squad within a shot of tying it up.

"I think they like the struggle," Pioneers coach Thomas Dilworth said after the final buzzer sounded on a 52-47 victory, perhaps only half-joking. "One of these days, we're going to put four quarters together."

While Big Sandy declined to make it easy on themselves, they did manage to make it exciting and come through in the clutch. Junior Kade Strutz exited the game with 45.3 seconds remaining, drawing his fifth foul against Knights junior Payne Ditmar. By that time, however, Strutz had already put his stamp on the contest. A pair of punishing drives into the lane resulted in a bucket that lifted him to a triple-double for the night and a trip to the line for his 12th and final point. That gave Big Sandy an insurmountable 48-41 edge just inside of a minute to go. Strutz added 11 steals and 10 rebounds in the effort.

"He was an animal," Dilworth said. "He played phenomenally."

While Ditmar sank one of his chances at the charity stripe, freshman Braydon Cline found senior Clint Darlington down low at the other end to keep Big Sandy three possessions ahead with half a minute left, 50-42.

"Off the bench, (Cline) played huge minutes for us tonight," Dilworth said.

The final result turned out too close for the purple-clad faithful's comfort but the effort got back on-brand for Pioneer hoop. Big Sandy outrebounded North Star 43-33 and outscored them in the paint, 34-24.

While the Pioneers could not beat the Bears at their own uptempo game in an 81-76 loss, neither could North Star grind it out in the Big Sandy gymnasium. 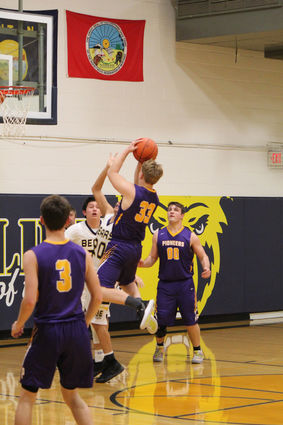 The visit Friday to Box Elder is one the Pioneers probably wish they could have back. First and foremost, they lost senior Brock Proulx to a broken foot, out six to eight weeks and thus likely the remainder of the season. Then they dropped a contest in which they outshot their rivals from the field (50 percent to 38), outscored them in all but the second quarter and outrebounded them, 35-33. The difference showed up in the Bears nearly doubling Big Sandy in free-throw attempts (33-17), however, and connecting at almost twice their rate, too (79 to 47 percent).