Pioneers extend win streak to three, with wins over Turner and CJI 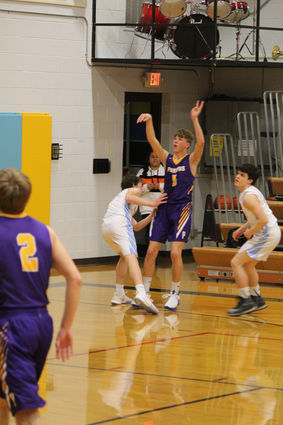 For the first time in league play and since the season's opening weekend overall, the Big Sandy Pioneer boys basketball team swept its weekend games.

The Pioneers used a 30-5 demolition of visiting Turner in the third quarter Friday to fuel an 82-48 win. Big Sandy went on the road Saturday to knock off the Chester-Joplin-Inverness Hi-Line Hawks by a 59-44 count.

For most of the first half, it looked like a scrappy Tornado team would pester and irritate the Pioneers until the end.

"We came out slow and methodic. We came out flat," said Pioneers head coach Thomas Dilworth. "(Turner) came out and slowed the tempo and we just looked sluggish."

Leading by just five points late in the second quarter, only a bucket from eighth grader Wylee Snapp with an assist by freshman Kody Strutz and a subsequent bucket from Strutz provided Big Sandy a little more breathing room at the break. The Pioneers went into the locker room with a 35-26 lead.

"(Assistant) Coach Laci (Keller Christenson) gave them a good pep talk," Dilworth smiled, adding she "kind of laid into them a little bit."

The Big Sandy boys apparently heard the message loud and clear. Senior Ryan Roth scored 16 of his game-high 31 points in the third quarter and senior Jeremiah Genereux added eight of his 11 on the night, including two daggers from behind the 3-point arc.

"When Jeremiah shoots the ball like he did tonight, that opens everything up," Dilworth said. "That's really good for our team."

Fresh off a triple-double against North Star, junior Kade Strutz got back into double figures for scoring with 10 points and made his presence known on the defensive end with timely steals. His coach is happy to see him coming into his own as of late.

"When he wants to, Kade can take over the game," Dilworth said. "He's a little too reserved sometimes."

With 12 from senior Clint Darlington, a quartet of Pioneers finished in double figures and 10 players from Big Sandy got in the scorebook in all. Dilworth emptied his bench in what became a rout by the final buzzer.

"It's always good when we get everybody some playing time," he said. "We came out and played in the second half like we should have played all game. We're still waiting to play four complete quarters of basketball." 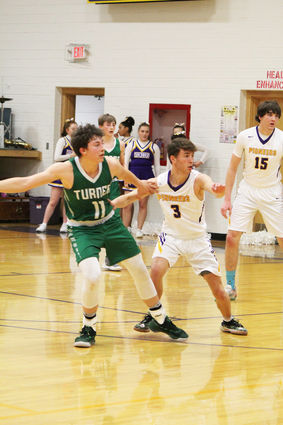 Big Sandy took the momentum from that second half with them to Chester. Facing a team Dilworth described as uptempo and disciplined entering the contest, the Pioneers managed to control the lead virtually throughout. But again, they truly took off in the second half, stretching a lead of a half-dozen at halftime to comfortable double digits only in the final period. Big Sandy held CJI to a mere three trips to the free-throw line and forced them to contend with Darlington's size and strength as he poured in a game-high of 17. Roth and Kody Strutz added 13 and 11, respectively.

The Pioneers (4-3, 6-4) return to action Thursday hosting Chinook with a junior varsity tip-off at 4:30 p.m. and varsity at 7:30. Big Sandy travels Saturday to Hays for games with the same tip-off times.