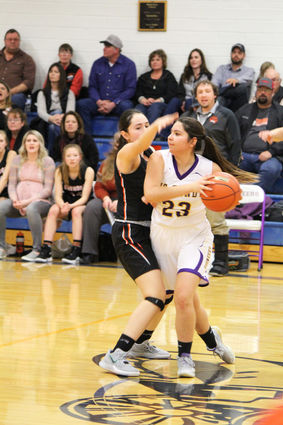 Senior Seanna Demontiney (23) looks to pass the ball off. During the overtime game against Chinook.

When the final buzzer sounded, the Big Sandy Lady Pioneers started embracing and jumping up and down on the sideline.

With a 36-30 triumph Thursday against the visiting Chinook Sugarbeeters, the Pioneer girls ended a couple of significant skids that were weighing heavily on a tough-luck squad.

The victory represented the first win in District 9C play for Big Sandy in more than two years, when they trumped Hays-Lodgepole 50-39 on January 23, 2018.

Twenty-seven losses in the tough conference that produced two state championship teams between then and now ensued. There were also three losses t...