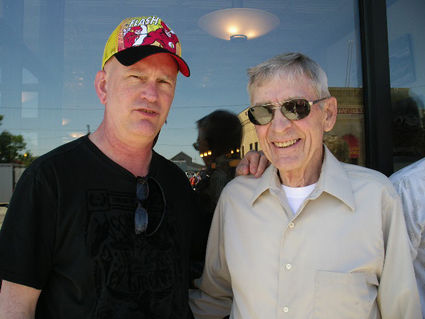 Like a lot of people, I have fond and nostalgic memories of my high school days. Well, at least I have memories. I can't even estimate how many people I know these days who say they can't remember anything that went on in high school. And some of them graduated this century! For whatever reason, I have pretty clear memories of those days. That is not to say they are accurate, or fair and balanced. But I do remember.

I graduated from BSHS in 1974. I didn't work as hard as I should have in school, I got kicked out a couple times for a day or two when I was a senior because I wouldn't get a haircut or I wrote an article for the school newspaper that rubbed somebody the wrong way, that sort of thing. I made a few good impressions. I no doubt made a few bad ones as well.

I didn't get along very well with some elements of school administration. The principal and I, we were often not on the same page. Looking back on it now, Mr. Hammond was probably right more often than he was wrong. And I was probably wrong more often than I wanted to admit – granted, I thought I was right all the time and he was wrong all the time, and I think he probably thought the same, from his perspective.

Ultimately what got me through it all, was the English teacher, Lawrence Green. As a student I applied myself selectively to various subjects, and my grades reflected that. I always did well in English. Much of the reason was, I love the English language, always have. Writing it, reading it, speaking it, corrupting it to my own needs – all of that. But a big reason I love writing and reading is down to one man's influence – Lawrence Green. He showed me the way, simple as that. Just as he often got in between Swede Hammond and Steve Sibra, smoothing things over, he also got in between me and my bad attitudes, and showed me there was more than one way to see things.

Lawrence made me a librarian at the school and when I was bitching and moaning about something "establishment" that I didn't like, he got me down some books from the top shelf – books they didn't give to the kids to read in those days. He told me, "you should read this," and he handed me Salinger's Catcher in the Rye. Lawrence said, "I don't let most of the kids read this book, but to shut you up, I think we had better use some drastic measures."

After my mind was blown by Salinger (I did not know you could write a book like that, say things like that in a book) he handed me Play it as it Lays by Joan Didion. In retrospect these books are not that radical, but to me, at that stage, they were certainly eye-openers.

Lawrence Green, as an educator, was precise, demanding, innovative and instinctual. He cared so damned much about people, and the way they expressed themselves – the way they had historically expressed themselves – that it hurt him sometimes. I learned a lot about passion from Lawrence Green. I learned a lot about honesty, and dedication, and devotion to one's charges and to oneself.

Lawrence Green was probably always pretty conservative, but you know what? His mind was as wide open as the big skies of Montana that surrounded him. His ideals were always as high as the mountains he loved to live in, his spirit was always as wild and unpredictable and as powerful as the horses he loved to ride. When I am in Big Sandy, I still go to Lawrence and Connie's house to check in. Lawrence is hard of hearing and you have to yell at him a little to talk to him, but he doesn't mind. He says he doesn't remember this or that, but whether he does or he doesn't, he still shows me he's got it. The warmth, the laughter, and the strength of his own convictions.

When I start to list the people who made me whatever it is that I am, for better or worse, the ones who I have to thank for whatever I have accomplished in my sixty some years, Mister Lawrence Green is right at the top of that list. Whatever good is in me, Lawrence Green helped put it there. As for the sex, drugs and rock and roll; well, those are another story, for another time perhaps. Should I choose to tell those stories, I can tell them well, and much of the reason for that is because of Lawrence.

For right now, I just want to say "Thank you" to Lawrence Green, for all that he has done for me, and no doubt countless others who passed through his classrooms.