Yanci Phillips celebrated her 5th birthday last Wednesday, September 15th. Her mother, Karli Phillips explains: "It's a HUGE deal because before she was born, we were prepped that she might live an hour, if that, and five-years old is a big deal."

Karli and Victor Phillips heard the news of their unborn daughter's health issues at their thirty-week ultrasound. "They found brain issues. They found heart issues. They found spine issues. They told us that she had severe hydrocephalus and lung issues. They weren't sure if she had a tumor where her right lung should be. It turns out she was just missing her right lung." Hydrocephalus is a condition where spinal fluid builds up in the cavities deep within the brain. It causes an enlarged head and can cause brain damage. In Yanci's case, the Phillips family was told that Yanci hadn't developed much brain tissue as a result of the condition. "She had three heart defects: ASD, VSD, and PDA. One of those is life threatening, I believe it's the PDA. If you have a right lung, it's life threatening. If you don't, somehow, it's not." Yanci being born without a right lung saved her from the potential heart problem. "We were posed the question: 'Are you going to do brain surgery or heart surgery? Because both are life threatening, you need to do both. Which are you going to do first?' How do you make that decision? In the end, we didn't have to. God made the decision for us."

When she was delivered by c-section, Yanci wasn't breathing. She was blue and gray, lifeless, and not breathing. They set Karli's baby on her chest and covered her with a blanket. Panicked, Karli asked the doctors and nurses: "Is my baby breathing?" No one in the room responded or made eye contact. She asked again: "Is my baby breathing?" Again, none of the doctors and nurses looked at or responded to Karli. Frantic, she shouted: "Can somebody tell me, is my baby breathing?" This time the midwife who was assisting the OB looked at Karli for a second and shook her head "no" before looking away again. "That was rough," Karli explained. "They're fixing me up from a rough c-section, and I'm trying to focus on being thankful that I'm ok, and we got to meet this baby. The song 'It Is Well With My Soul' came into my head because I had to be ok with it. This was God's plan, apparently. We had to be ok with what was going on. I just started rubbing her back real softly and singing "It Is Well With My Soul." About two times through the song, Karli heard a squeak from baby Yanci. The nurses assured her it was not a sign of life, but just air crossing the baby's vocal cords. Karli kept praying and thanking God. About 30 seconds later, Yanci squeaked again. The doctors assured her again that it was normal. Yanci kept squeaking louder and louder. Before long, she reached out and grabbed Victor'a finger and just held on. Then she began crying, which Karli described as the best sound ever. "I knew that God was in control, and I knew that God had everything, and He had us in all of this."

"I was ready to bury our child. We had the funeral arrangements made. We had the baby's outfit picked out. We had all of it done. So when she started squeaking and crying, that was the best sound in the world."

After Yanci began showing signs of life, the family was brought in to meet and hold her. "I remember looking at the time. Then I looked over at Victor, and I started panicking because it was an hour and two minutes and I was like 'what are we supposed to do?' He replied: 'What do you mean?' 'She's only supposed to live an hour! And it's an hour and two minutes.' He answered: 'Just let it go. Just let it go.'" Throughout the afternoon, family members kept commenting on the time and how long had past since the predicted "one hour" had expired. Eventually, doctors began to plan for sending Yanci home, where they predicted she would pass away in a day or so.

Three days later, Karli and Yanci were on a flight to Salt Lake City where Yanci would undergo the first of several surgeries to deal with hydrocephalus. Karli recalled the words of one doctor who spoke frankly with her on their second visit to Salt Lake: "She said: 'You have to understand something. With what your daughter has got going on, she will never see you. She will never hear you. She will never talk. She will never walk. She will never formulate a single thought of her own. What you look at right here is what you have for the rest of your daughter's life. You have to come to grips with this." Karli remembers her reply clearly: "I said 'I appreciate your medical opinion because you know what books have told you. But I feel like my daughter can hear me. I feel like she can see me. I know we serve a big God. I think God has bigger plans than that, and I'm looking forward to her having a full life." The doctor replied: I warned you." The same doctor was reduced to tears three years later when she was introduced to a walking, talking, hearing, and sassy Yanci Philips. 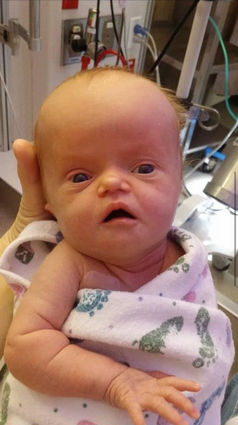 Five years, seven major surgeries, several minor ones, and countless hospital stays later, Yanci named the doll she got for her birthday "Baby Evelyn" after her niece. She didn't get the horse she asked for, but she enjoyed cake on her big day. She has also spent her days playing with the little karaoke machine she got as a gift. Her favorite karaoke song is the very fitting, "Amazing Grace."

As a town, we have been blessed to witness the miracle that is the life of Yanci Philips. She was born dead, then came back and beat every prediction regarding her lifespan and limitations. "She is a fantastic little girl who has compassion for others. She is witty and funny. She's an amazing little punkin."

The Phillips family expressed a great deal of gratitude for all the prayers, love, support, and help they have received in the last 5 years. "We've been blessed by friends, family, church family, and the whole town."