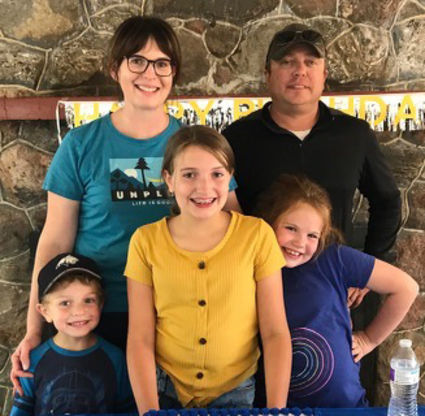 "It's an adventure every day. You learn something new whether you plan for it or not," Samantha Burns Weaver said, explaining her love for teaching kindergarten. "There's a lot of growth from the beginning of the year to the end of the year, and knowing you had a part in that is incredibly rewarding. It's a little bit of a struggle getting to that point because in the beginning of the year, it's a lot of modeling, reteaching, and repeating yourself. The end goal is incredibly rewarding." Mrs. Weaver has been teaching the littlest people at FE Miley Elementary School for four of her ten years as a kindergarten teacher. She began her teaching career at the Warrick Country school, teaching a mix of students of various grades, but discovered and fell in love with teaching kindergarten when she took a job in Uln to live closer to her soon-to-be husband, Brad Weaver. The pair returned to Big Sandy, where Mrs. Weaver took 5 years off from teaching to focus on growing and raising her family. The Weavers have three children: Elaina, a 6th grader; Casey, a third grader; and Luke, who started preschool this year. Her husband, Brad, works for CF Industries, a fertilizer company out of Chicago. He is the wholesale manager for the entire western United States. The position allows him to work from wherever he has internet access and a phone.

Samantha was raised in Zurich, Montana and attended High School in Chinook. She knew from an early age that she wanted to be a teacher, often playing school with her sisters (whether they were willing or not.) Later, she went to Northern, where she earned an Associate Degree in Applied Ag Technology before finishing her teaching degree. She explained that she discovered an interest in Ag business and sciences while in school. That interest and her desire to be able to contribute to the family farm and ranch business, should the need arise, prompted her decision to earn her Associates. She works to incorporate elements of agriculture and science into the classroom setting. She explains that it's tougher because the kids are kindergarteners, but that basic ideas work. She went on to recount how she taught a group of 5th graders in the Boone and Crocket Club of Hyperion, Montana the material she had learned in a MSU Northern class.

Mrs. Weaver loves life Big Sandy. After growing up in a small town and attending a small college, our town is a good fit. In addition, she loves "...how everybody is willing to help each other and step up to the plate to do what needs to be done." Her feelings of affection for our larger community extend to the teaching community at FE Miley. After teaching in a country school, where she was the sole staff at the school, Samantha appreciated the close knit group of teachers in Uln and now in Big Sandy. She loves how all the teachers communicate and cooperate to ensure that the students transition smoothly between grades and are successful in their work.

Mrs. Weaver loves CrossFit, and will be celebrating her 3rd anniversary of her start with the fitness classes. She is particularly proud that she has stuck with it. She explained that she loves knowing how much she can deadlift and that her fitness has improved. In addition, she explained that the exercise classes help her clear her mind and destress after a day of working with kindergarteners.

Samantha also enjoys gardening and landscaping. She explained that she learned to landscape while working at a guest ranch near Yellowstone during summers off from college. During her time there, she got to explore the park and stretch herself personally. "It was the first time I really ventured away from home. Far away. It was a good decision." She also enjoys outdoor activities, like camping and hiking with her family.