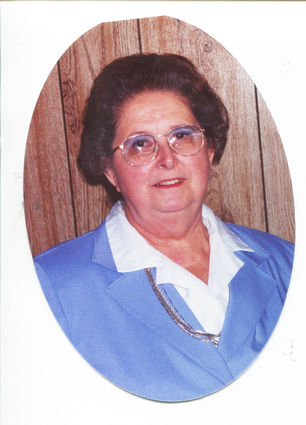 Alma Muriel Silvan, 93, of Big Sandy, Mt., joined our Heavenly Father on September 25, 2020. Cremation has taken place, and graveside services will be held at 11:00 a.m. on Saturday, October 3, 2020, in the Big Sandy Cemetery. Benton Funeral Home has been entrusted with services and arrangements. Please visit Muriel's online memorial page and leave a message of condolence for her family at http://www.bentonfh.com.

Muriel was born December 6, 1926, to Elmer and Stella (Goecks) Lund on the farm near Big Sandy, MT, the eldest of 6 children. She rode to school in a horse and buggy with the neighbors to Big Sandy where they parked on the edge of town and walked to the school. Muriel later rode the bus. After graduating, she attended Northern Montana College where she received a teaching degree. She taught at country schools southeast of Big Sandy, where she met her future husband.

In 1948, Muriel married Joe Silvan and they made their home on the family homestead southeast of Big Sandy. They raised 5 children, Shirley, Donald, Phillip, Janet, and Connie; and they also raised wheat, cattle, hogs, and chickens. The couple was well known in the Great Falls area where they had a weekly egg route, delivering nearly 200 dozen eggs per week. Muriel's expertise was in gardening. She raised a huge garden and froze and canned their year's supply of food. Joe built a house on the farm, which was later moved to town when they retired. She started her garden in town and planted many flowers also, which made her the local go-to for gardening advise. For over 20 years, Muriel wrote a weekly article called "In the Garden" for the local newspaper, where she gave seasonal advice on everything gardening, as well as grandbaby announcements.

Muriel was very artistic. She painted with oils in her early years, traveling to Fort Benton to take lessons. She later started painting with acrylics. Muriel traveled to Las Vegas to a creative painting convention. She adorned her home and the homes of others with her paintings and crafts. In 1989, she opened the Cornpatch Cottage, a soup and sandwich deli, with her daughter Jan, where she sold her many crafting projects, as well as taught craft classes for kids.

Muriel loved to travel. She and Joe went to Czechoslovakia to meet and visit Joe's family. She also traveled to Europe, Italy, Canada, and various places in the States.

Muriel was very active in the community. She was a member of Hopp Homemakers and a 4-H leader for the Happy Hoppers 4-H Club. She also spent many years at the Fort Benton fair, helping with 4-H entries and the Hopp community booth. She entered many vegetables, canned goods, flowers, and flower arrangements of her own, winning several Grand Championships.

Muriel's grandchildren and great-grandchildren were very special to her. She always had a candy or some change for them when they visited her in the nursing home.

Muriel was preceded in death by her husband of 48 years, Joe; son, Don; parents, Elmer and Stella Lund; and two brothers, Phillip and Bernard Lund.