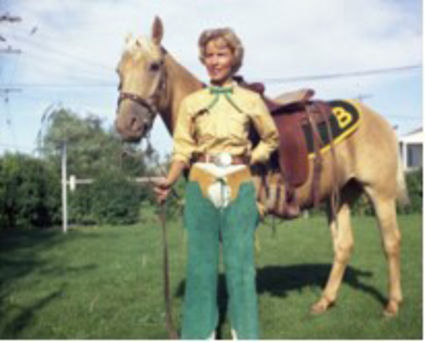 Bernice was born along with her twin sister Beatrice, in Portland Oregon on December 23, 1929 to Walter E. and Elsie F. (Black) Buchholz of Big Sandy, MT. After a few weeks they returned to Montana to join her sister and dad on the farm 20 miles out of Big Sandy. It was a tough life, but it didn't keep her from having fun. There are many pictures of her riding cows and pigs and playing with her sisters on the farm.

Bee went to a one-room country school for the 1st-6th grades, and then to Jr and Sr High School in Big Sandy, MT where she graduated from high school in 1947. She went to college for a year at Northern Montana College in Havre where she sharpened her secretarial skills. She won many awards for her shorthand. She then worked in Great Falls, MT where she met her future husband, Percy (Pete) Dunning. They both loved motorcycles. They were married in Great Falls, Mt on June 30, 1951. Pete served in the military (Navy) after they were married. After his honorable discharge, they made their first home in Portland, OR. and later moved to Idaho Falls, Idaho. Bee was active in riding her Palomino, Spook, in the Precession Drill of the Sheriff's Posse. She was an avid barrel racer and had the scars to prove it. After the birth of a stillborn son (Percy Durrell Dunning, Jr.) while living in Idaho Falls, Darryl Michael Dunning was born in 1953. Another son, Randall Terry Dunning was born in 1955. They enjoyed the wonderful fishing and camping close to Idaho Falls. Pete worked for a contractor of the Atomic Energy Commission (AEC) and when the work ended they transferred to Richland, WA where he worked for Westinghouse and later Battelle as a skilled machinist. Bee worked as a secretary for AEC until the late '60s. In 1960 they moved to the "country" in West Richland. Pete passed away on November 2, 1966. Bee stayed in West Richland and raised their two sons on Harrington Road, with her horses and other animals. She inherited a chicken (Bessie) from her mother who spent many a morning sitting in front of the kitchen window looking in at the family.

She married John Harry Hemperly in Portland, OR on March 4, 1967. Harry had four sons from a previous marriage: Nathan, twins Scott and Steve, and Rick. Harry and Bee raised Tennessee Walking horses and went to many Tennessee Walking Horse competitions. Bee won many awards and ribbons for her skill with their TW horses. They made many good friends. Bee started her cat boarding business in the early '70s, with one cat. She started a stud service for Abyssinian cats and raised Burmese cats too. Later as the business grew they added more boarding spaces. They had music, sky lights, it was air conditioned, and had great views of bird feeders for the cats' amusement. There was a playroom to give the boarded cats special attention. Their cat boarding business was very popular and she had many loyal customers. On holidays they were always full but could never say no. There was many times that they had over-flow cats in the house. On occasion, they took care of a ferret who kept things exciting. A cougar even visited once or twice (with its caretaker). She maintained the cattery well into her eighties. It is still going strong even during the pandemic, with Randy's help. A neighbor, Joan Moore was an invaluable friend to Bee and was able to take over the cattery on a moment's notice during emergencies or whenever needed.

Her closest friend and twin sister Beatrice Shane was a big part of Bee's life. She lives in the West Richland area and was always close by.

After Harry retired Bee and Harry traveled overseas and had annual trips to ancient and exotic ruins. Some of the places they have visited: Hong Kong, Galápagos Islands, Machu Picchu, Morocco, Kenya, Bangkok, the Amazon, Thailand, and four trips to Bali. Randy was able to travel with them several times. Bee and Harry enjoyed chartered fishing trips from Westport Washington to fish for salmon bringing their boys along. They spent many a fun weekend at the coast in their travel trailer. Harry passed away January 26, 2011.

Bee is preceded in death by her parents Walter and Elsie, and her sister Erma Reichelt.

The family would like to thank the staff at Parkside Adult Care Home, and Tri-Cities Chaplaincy Hospice for their care and understanding.

She will be greatly missed