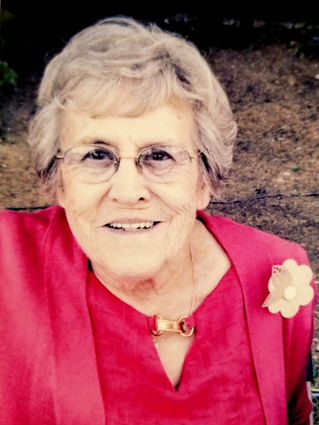 Darleen Joy was born on June 15, 1933 in Havre to George and Hilda "Beatrice" Schlack. She was raised on the family farm near Virgelle and attended Little School, 1 mile from the farm for grades 1-4 and Mount Vernon School, by the main highway for grades 5-8. Darleen, her sister Georgia, and their parents moved to Big Sandy where the girls attended Big Sandy High School. Darleen graduated in 1951. During high school, she enjoyed sharing a room and life with Georgia, her friends, cheerleading and meeting the love of her life, Kenny. On February 28, 1953, Darleen married Kenneth Darlington and the couple made their home on his family farm, where they raised three children.

Darleen was proud of the work she did prior to getting married and while married. During high school, she worked at The Grand Theatre (showhouse). After graduation and before marriage, she worked at Scott's Food Store and The Rexall Drug store for Vern Richter. Later on, Darleen also worked in town at the Montana State Liquor Store, Beth Courtnage's Day Care and at Pep's. Darleen took great pride in being a farm wife and all that it entailed: driving grain truck, cooking & baking, cleaning, and gardening.

Darleen was "Grandma Dar" to the 8 grandchildren she loved and rocked from their birth and the 7 "bonus" grandchildren she welcomed through her children's marriages, and numerous Big Sandy kids at one time or another. Working at the Day Care, all of the kids called her Grandma Dar. Her own grandson, Dustin also went there. One day he told one of the other kids, "She's not your grandma!" Years later when she overheard one of the friends of her youngest grandson, Dylan, say, "I want to go to Grandma Dar's", it pleased her to no end.

Darleen loved attending her grandchildren's sporting events and was their biggest "cheerleader"! Everyone will agree, she was an excellent cook and earned the family title of "Food and Beverage Director." No one ever went away from her house hungry. We will sure miss her chocolate zucchini bread, lemon bars and ground beef sandwiches! She was a master at removing any type of stain out of clothing and had a lot of practice at that. Darleen was an avid shopper but lost her desire after her favorite store, Herberger's, went out of business. She loved bowling and when she wasn't bowling herself, she kept score for years. The past few years, she became "Lady Luck" rolling dice at Christmas playing the "Dirty Dice" game. She enjoyed collecting beanie babies with Chelle, crocheting, bowling, gambling and scratch tickets.

Darleen was preceded in death by an infant son; parents, George and Beatrice Schlack; and sister, Ardis Shanahan.

Darleen's family has suggested memorial donations be made in her memory to the Big Sandy Medical Center or the charity of the donor's choice. Holland and Bonine Funeral Home has been entrusted with the services and arrangements. Please visit Darleen's online memorial page and leave a message of condolence for her family at http://www.hollandbonine.com.