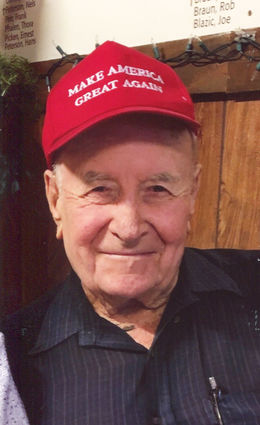 Lawrence R. Ophus, 94, passed away surrounded by his loving family due to natural causes at the Big Sandy Medical Center on Tuesday, October 27, 2020. Graveside services were held at 10:00 a.m. on Saturday, October 31, 2020, in the Big Sandy Cemetery with Father Pete Guthneck officiating. Lawrence's family has suggested memorial donations be made in his memory to the Big Sandy Volunteer Fire and Ambulance Department, Big Sandy Medical Center, Big Sandy Medical Guild, or the charity of the donor's choice. Holland & Bonine Funeral Home has been entrusted with services and arrangements. Please visit Lawrence's online memorial page and leave a message of condolence for his family at http://www.hollandbonine.com.

Lawrence Robert Ophus was born February 7, 1926, to Anton and Pearl Ophus, the seventh of fourteen children, known to his family and friends as Laurence, Luke, or Larry. He went to Big Sandy schools until he quit to help out at his family and neighboring farms. He joined the Army in 1944, and was honorably discharged in 1946. He returned home to establish his own automotive repair shop and farm. He married the love of his life, Norma Krumsick, on June 12, 1949. They had five children.

Lawrence and Norma traveled the country (usually with good friends Claire and Della Sohm) eventually moving south to their winter home in Yuma, Arizona, where for decades they enjoyed the warmth, friends, dancing, and meat draws. After Norma's death in 2003, his family became his traveling companions south every winter. He looked forward to the annual "Ophus Cousins Weekend" every March where numerous family members congregated in Yuma for cards, washoe, refreshments, and fun.

Lawrence was well-known for his mechanical and farming abilities. For many years, he drove school bus and took many Big Sandy sports teams to their events throughout the state. He was an ambulance driver and volunteer fireman for 32 years and a loyal member of the American Legion and VFW for 72 years. He enjoyed hunting, fishing, boating, and camping. He was an avid horseshoe, washoe, bowling, and card player, especially enjoying pinochle and "65" (usually playing for money, of course, to make it worthwhile!)

He was preceded in death by wife, Norma; parents, Anton and Pearl; sisters, Evelin, Gertrude, Ruth, and Jeanine; brothers, Alfred, Helmer, Ben, Myron, Lester, and Byron; son-in-law, Roger Pearson; and many other special family members and friends too numerous to name.