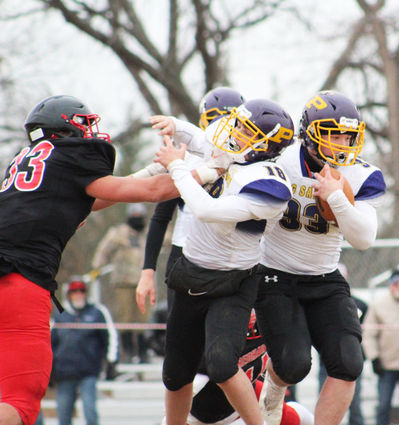 It's hard to find the right words to express the wide range of emotions felt Saturday in Medicine Lake as the Pioneer's championship hopes came to an end in a devastating loss to Froid/Medicine Lake.

The Pioneers got off to a great start with Brady Plenninger striping the ball on the Redhawks first possession before Kade Strutz would rush in from 4 yards out the put the Pioneers up 6-0. Again the Pioneers would force another fumble and recovery on the next possession. Still, uncharacteristic penalties kept them from getting in the endzone and giving the ball back over to the Redhawks, who would march down the field for their first score of the game and their first lead after the conversion making it 6-8.

The rest of the first half was a back and forth slugfest up and down the field with the Pioneers looking in control and leading 14-8 before the Redhawks punched in 2 quick scores in the final 4 minutes of the first half to take a 28-14 lead going into halftime.

The second half started great for the Pioneers, marching down the field on their first possession for another Strutz touchdown to push the score to 20-28. The Pioneers defense would make a stand on the next possession to get the ball back before marching down the field for another touchdown, but another blocked extra point attempt would bring the score to 26-28. Unfortunately, that would be the last time the Pioneers would find the end zone before Froid/Medicine Lake would put the game away with their second touchdown of the fourth quarter to put the game out of reach 42-26 with less than a minute to play. 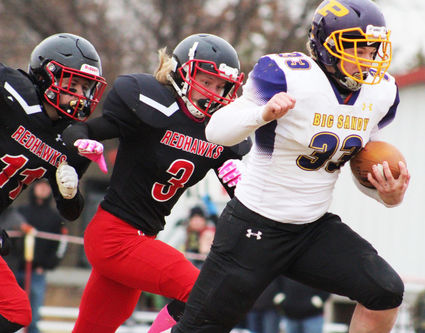 Senior, Kade Strutz (33)making a run to the end zone for one of his 4 touchdowns during Saturdays Semi-Final game against The Froid/Medicne Lake Red Hawks.

The final buzzer sounded. The moment seemed surreal the sideline silent; you could see the agony in the faces of players, parents, and fans as they wrestled with the pain of a devastating loss; it was excruciating. You could watch the inner struggle of parents and fans as they shared in the pain and disappointment their kids were feeling while at the same time feeling overwhelmed with an enormous sense of pride. Then it happened, the Pioneer fight song, usually led by the players, this time the parents and fans led it as an expression of their love and appreciation for what they accomplished this season. For letting us be part of their journey, and for the kind of men they are. It was hard to muster the words to sing through all the raw emotion, but you couldn't deny the sense of pride that was felt to be a Pioneer that day on that field as that song was sung.

Years from now, very few people will remember this game's final score, but they will never forget this team's character and how they carried themselves, and how well they represented their school and their community. We couldn't be prouder to be Pioneers! Thank you, Big Sandy Football Coaches, Players, Parents, and Fans. WE ARE THE PIONEERS - HEY