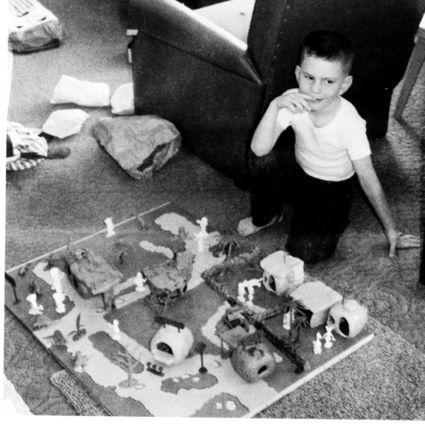 My mother, Arlene Geyer Sibra, was old school all the way. When I was a kid, I heard all manner of old sayings come from her, everything from Bible quotes to the Farmer's Almanac. I thought some of it was just nuts, like something out of the science fiction comic books that I loved so much – for example; she had all sorts of theories about the moon and its position in the sky causing this or that. If the crescent moon was tipped up straight, it was like a ladle dumping out water, which meant it would be a long rainy season. I would roll my eyes. Yeah, right. But I loved how weird it all was.

She often told me, "It is better to give than to receive." Like so many of her sayings that I scoffed at, this one turned out to have a lot of truth to it; but as a kid, I was not buying that for a second. Giving was fine, but man, raking in the loot, especially at Christmas – nothing topped that.

In the summer of 1963, our household was blessed by the magic of television, thanks to a delivery from the local wizard of Zenith electronics, Timmy Godfrey. Up to that point, I had seen very little TV (I was seven at that time). Besides the memories I have of watching the Kennedy assassination coverage and (a bit later on) the Beatles' first appearance on Ed Sullivan, I really remember getting that television was the cartoons, and my favorite right off the top was the Flintstones. The show had debuted in the fall of 1960, but I knew very little of it until we got television.

I soon learned of the many Flintstone games and toys. The holy grail of Flintstones toys at that time was the Marx playset, which contained all the characters from the show, the homes of the Flintstones and the Rubbles, and other buildings and people making up the town of Bedrock. Complete with a playmat that reproduced streets and parks, I was all set to dive right into the prehistoric world of Hanna-Barbera cartoons brought to life.

Receiving that toy for Christmas in 1963 was my big score of the year, and for a couple of years, I played with it regularly – sometimes joined by one or more of my cousins, but often it was just me, Fred, Barney, and their soft plastic cohorts.

Then, when I was about fifteen or sixteen, a funny thing happened. Before Christmas, there was an organized toy drive in Havre, seeking donations for underprivileged children, as they put it. For some reason, I never totally understood; I went to my mom and suggested that we take some of my old toys to donate. They had been gathering dust in the basement for a few years, and my focus had changed – I had moved on, first to Spider-Man comic books and then to things like motorcycles and cars and girls. My mother said she was proud of me for being generous, and I am sure the old adage about giving and receiving was trotted out one more time.

Now that could be the end of the story, things coming full circle, lessons learned and so on . . . but hold your horses, there, Boss. It turns out that was not quite the finish. 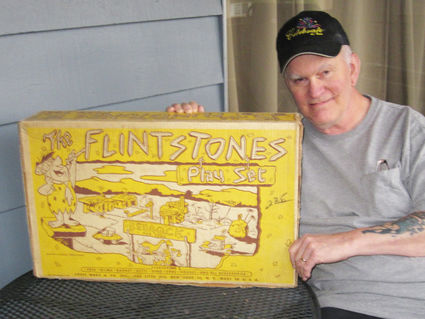 A couple of decades later, while making my living buying and selling vintage comic books, I happened across the Flintstones playset at a local toy show in Seattle. Complete and with the box. I stopped in my tracks, taken back to those memories. Next thing I knew, I had repurchased the toy – but where the original one had sold for about three dollars in the Sears catalog, it cost me two hundred and fifty bucks to get those memories back.

For me, it was first better to receive, then later better to give, and finally, it was all good when once again I recovered this piece of my childhood, which I had never really let go, as it turned out. Today I have the memories and the near-mint condition toy to show for the whole cycle, which I think might now be complete. I can derive pleasure from thoughts of some little boy or girl back in 1971 who was probably thrilled to receive my original Flintstones set as their Christmas surprise. And when I think of that . . . I can't help it . . . I do feel good about giving. One more up on the board for my mom; she was right all along.