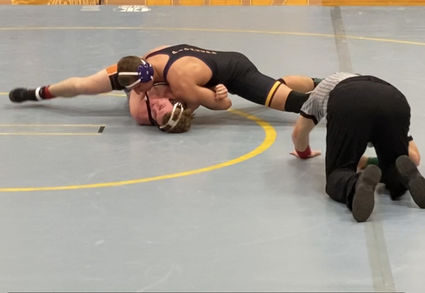 Senior, Brady Pleninger is new first year wrestler for the Pioneers. Brady gets a 17 second pin.

The Big Sandy Pioneers are contributing twice as many wrestlers in 2021 to their co-op squad with Fort Benton as they did in a successful season a year ago.

The Fort Benton/Big Sandy combined team earned third place in the state at the Class C level, with Bayley Genereux representing Big Sandy at the state meet in the 138-pound division.

Genereux returns as a senior, wrestling up to 145 pounds this season, along with Tannin Baumann, a sophomore hoping to earn his own spot at state at 132 pounds with another year of matches under his belt.

Newcomers are another senior, Brady Pleninger, at 205 pounds, and freshman Reinhard Bold, competing at 138.

Big Sandy coach Tucker Taylor said the grapplers have been doing well, improving upon last season's performances and join the Longhorns to form a team of 12 in all. With COVID-19 restrictions, they are competing in duals and mixers capped at 40 athletes, wrestling Jan. 2 at Cascade, Thursday at Chester and Friday at Chinook before a scheduled match after press time Tuesday in Fairfield.

At the Class B/C level, Taylor said keeping numbers limited is "fairly easy to do."

"You're just not going to see as much of the state as you usually do before you get to divisionals," he said.

That postseason tournament is scheduled for Feb. 26-27 in Colstrip.

The mixers have allowed each wrestler about seven or eight matches thus far in this compacted season, Taylor said.

"I just want us to have a full season like we were able to achieve with football this year," said Taylor, an assistant coach with the Pioneers' gridiron program.

Taylor said goals for his wrestlers include a return to state for Genereux "to win a match or two this year." As a junior, he went 0-2 after reaching the tournament in Billings.

Baumann has been "wrestling pretty darn well," he added, as he pursues a state bid.

Pleninger has middle school wrestling experience before jumping in this season.

"He's big, strong kid," Taylor said. "He's still got a lot of technique to work on."

Bold is a talent Taylor has been eagerly awaiting to reach the high school ranks for some time.

"I knew he's a kid who's done a lot of those AAU tournaments, a lot of traveling to wrestle," he said. "He's way above a lot of freshmen."

Case in point, he defeated a junior in one of his first matches.

The format for wrestling in a pandemic "does make it easier to contract trace," Taylor said. "They clean mats between wrestling rounds at mixers and they've always done that."

Genereux and Pleninger will be recognized Jan. 19 when Fort Benton hosts a mixer/senior night and Taylor said they will be in the spotlight again when Big Sandy is slated to host its lone home mixer of the season on Thursday, Jan. 28.