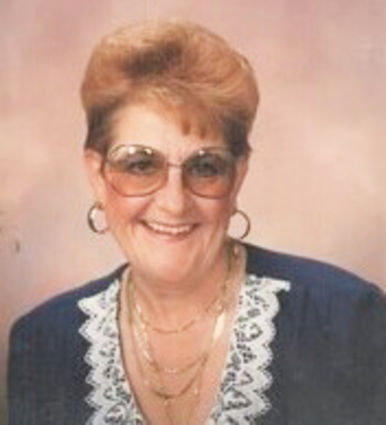 On Tuesday, January 5th, 2021, Irene May (Bitz) Holden, age 81, took her last lap through the halls at The Ivy in Great Falls, Montana, passing away peacefully. She is now with her Lord and Savior. Cremation has taken place and a private family burial will be held at a later date. Irene's family has suggested memorial donations be made in her memory to HCCF (Hill County Community Foundation), PO Box 16, Havre, MT 59501. Holland & Bonine Funeral Home has been entrusted with services and arrangements. Please visit Irene's online memorial page and leave a message of condolence for her family at http://www.hollandbonine.com.

Irene was born September 27, 1939, in Havre, Montana to Henry and Matilda Bitz. One of 19 children born and raised in the blended Bitz families, she grew up on the farm in Big Sandy. Her spirit never left the "Bitz Place," and she took many of the lessons she learned there with her throughout her life. More than anything, she passed on the work ethic she acquired watching her father and brothers till the soil, and helping her mother and sisters take care of the family.

In 1961, she met Rill Montgomery "Monty" Holden at the Vets Club. The two loved to dance, and he literally swept Irene off her feet. They were married January 21, 1962. From their union they were blessed with three children, Lisa, Shawn, and Jason. Irene and Monty later divorced.

The Bitz work ethic never let Irene rest. After she was a beautician, she worked for the Burlington Northern Railroad, started her own housekeeping business, and eventually cared for the elderly at her "Country Heart Home" for 11 years. In all that she did, she cared for those that she worked with and for.

Irene left behind many memories with her gifts, but perhaps more than anything she left behind empty stomachs. Man could she cook! Her specialties included her famous Potato Salad and Homemade Mac & Cheese and her Christmas Time Snack Mix that you could never get enough of. There was nothing like walking into Grandma Bitz's house and smelling and watching her and everyone making fresh cinnamon rolls. Irene was simple, yet complex in her approach to life. She could take bare ground and create a landscape of color with her flowers. She can now enjoy all of God's creations from above.

She was preceded in death by her daughter, Lisa Cottrell; parents; 16 of her siblings; and nephews and nieces.

She is survived by her sons Shawn (Christine) Holden and Jason (Angela) Holden; grand-children Taylor Cottrell, Faith Cottrell, Jacob Holden, Kendall Holden, Avery Holden, Trinity Holden, and Aiden Holden; one great-grandson, Tristan Cottrell; brother, Russell (Sharon) Bitz; sister, Sanda (Robert) Kinsella; and the many friends she has made over the years and her wonderful caregivers from the Ivy.