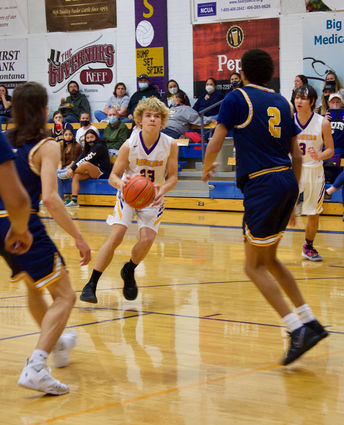 The Pioneer boys produced their first win of 2021 when they went on the road Saturday to North Star.

Big Sandy bested the boys from Rudyard 52-45 in an afternoon tilt to get the monkey off their back and try to spark a run through the last three opponents they had yet to face in the District 9C this season.

The Pioneers (1-4) complete their first go-round through the league slate with a 6:30 Friday tipoff against Turner before traveling Saturday to Hays-Lodgepole. Both teams are beneath Big Sandy in the standings and present an opportunity to climb to the middle of the pack.

The battle with the Bears featured 8 lead changes and 5 ties, with Big Sandy extending its largest lead of 48-43 at the end of the third quarter. That edge came on the strength of freshman Lane Demontiney's 16-footer to untie a 43-43 knot and fellow frosh Cooper Taylor snagging a steal in the backcourt and drawing a foul on his quick turn to the hole, completing the three-point play at the line.

Demontiney and Taylor were top scorers for Big Sandy on the night with 17 and 15 points respectively. Tayce St. Pierre paced Box Elder with 19.

"We've got some fun kids coming up. We hoped to get this win tonight but we knew this would be a tough start," Dilworth said. "I'm not happy with the way I coached but I'm happy with how they performed."

In the fourth quarter, Dilworth said "we pulled them out and put in a different offense ... we hadn't been practicing as much. Turnovers and that (Box Elder full-court) press killed us."

The difference between a cool and collected upperclassman-laden Box Elder squad and the upstart Pioneers showed in crunch time.

"That's experience. You can see (Box Elder's) demeanor. They're calm. They're not worried," Dilworth said. "We've got a lot of freshmen who haven't played with a fourth quarter lead before."

The Bears opened the final period with a 9-0 run before Demontiney hit a baseline jumper to tighten it back up within 52-50. He sank two three-pointers to close out the contest but it came too late to change the outcome after a 12-1 Box Elder run shut down the Pioneers' comeback hopes.

Big Sandy benefited early from Kade and Kody Strutz's instinctive driveway-honed knowledge of where to find one another on the court. Kade assisted Kody on both of his first-quarter buckets before Kody returned the favor. He found Kade spinning inside to the rack to grab an 18-17 lead barely a minute into the second period.

The next time the Pioneers found themselves down, Kade grabbed his own rebound and the putback made it 22-21.

It was emblematic of a fine night crashing the boards.

"We killed them on the glass," Dilworth said. 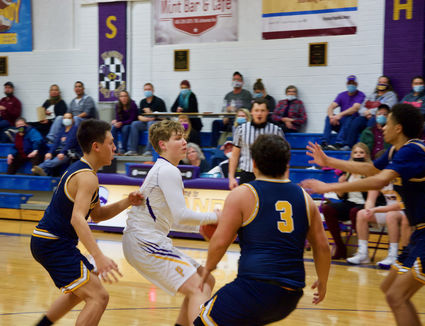 Slipping behind 31-26 at the break, Big Sandy climbed back with a variety of offensive looks in the third quarter. Demontiney completed a three-point play at the line to snap the dry spell and Wylee Snapp came on to turn and shoot a 15-footer that made it just 33-31 in the Bears' favor. A corner three from Braydon Cline drew it to 35-34. A Demontiney foul shot tied it and Cline's pass to a streaking Kody Strutz along the baseline led to an assist and a 37-35 lead, forbidding the Bears to pull back ahead in the third quarter.

Dilworth found himself pleased at the end of the night with the way his young squad went blow for blow with their rivals.

"For young kids to have that grit and not to give up," he said, "that's something special."