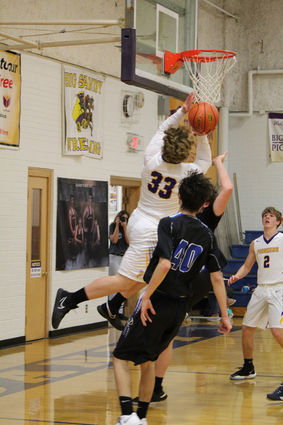 Check "season series sweep" off the to-do list for the Big Sandy boys after a 68-55 win Saturday against North Star in varsity basketball.

The Pioneers moved to 4-7 with their first home-and-away sweep of a District 9C foe. The opportunity remains open to do the same against Turner in Friday's rematch on the road.

On "Parents' Night," when graduating seniors in particular were honored, Kade Strutz fittingly led Big Sandy with 22 points. The year-end celebration bumped up as Saturday's home finale against Hays-Lodgepole remains questionable. Numerous COVID-19 cancelations have befallen the Thunderbirds, including a road contest for the Pioneers that has not been re-scheduled.

Big Sandy relied on a balanced attack in the first half with Kade's 11 points leading the way, another 8 each from Cooper Taylor and Braydon Cline, 7 from Lane Demontiney and 4 from Kody Strutz.

"We need four guys in double figures each game and we'll be hard to beat," Pioneers coach Thomas Dilworth said. "We play like that in the (9C) tournament and we have a good chance at making divisionals ... we might sneak in that back door one more time this year (but) it would be the last time. People are going to start recognizing (us)."

Saturday finished with Cline joining Kade in double figures with 12 points. Taylor and Kody Strutz (8 each) were knocking on the door in the home win.

The Pioneers let North Star hang around a while with some silly fouls and giving up quick buckets in transition after their own baskets in the first half. Taylor provided some spark by playing much larger than his height would suggest. Giving up a steal to the Knights' Gavin Spicher, Taylor raced back to the other end of the court and blocked a shot to erase the damage early in the second quarter. He earned the next bucket to extend the lead to 23-16 by cleaning up on the offensive glass.

A pair of free throws by Demontiney stretched the lead to 38-23 as just four ticks remained on the clock in the first half.

However, with less than three minutes of the second half expired, North Star more than halved the deficit by way of an 11-3 run.

Dilworth called a timeout, in which he said a simple adjustment put the game back in control.

"We just had to get some ball handlers in there," he said, as the Knights were feasting on turnovers.

The Pioneers kept the lead in double digits the rest of the way and capped the victory with a crowd-pleasing three-pointer from Sonny Philips at the buzzer.

"(Sonny) comes and he works hard and he does his job," Dilworth said. "So that's great to see."

Not to be overlooked, the coach said, was the assist from Samuel Cox, who passed up an easy layup to feed his open teammate.

The North Star win represented a bounce back from a seven-point loss a night earlier in Box Elder.

"The first half, we were lethargic," Dilworth said. "They outworked us. We didn't play team ball against Box Elder. There were a lot of one-on-fives." 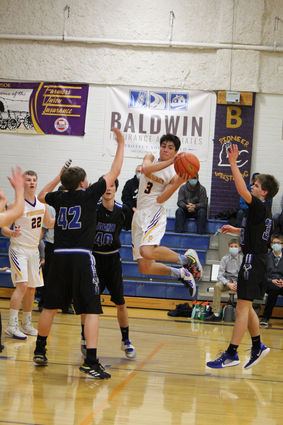 The coach would not mind another shot at the rival Big Sandy has come closest to without defeating.

"Right now, I think that we're a team that can do some damage," Dilworth said. "These guys have worked hard."

Big Sandy cannot control its own destiny for a home game to open the 9C tournament on Feb. 16. The district announced this week higher seeds will host the first two games before the survivors advance to the Blue Pony Corral, which usually hosts the entire tourney. Due to COVID-19 concerns, the tournament is being divvied up. If the tourney began today, Big Sandy would travel to Chester-Joplin-Inverness where they won earlier this season. The Pioneers lost at home to the Hi-Line Hawks in the second weekend of the season.