The Mountaineer celebrates 112 years of bringing you the News 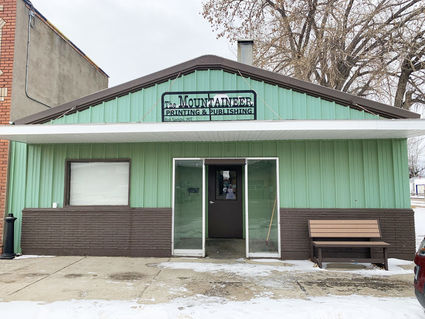 Editor's note: This was written by Robert Lucke and first publishedin 2010, when The mountaineer turned 100 years old. Robert Lucke loved doing history stories and he did a great job researching this article for the paper.

There is no confusion about one thing. This story could not have been written without the tireless research of Midge Edwards. "The Mountaineer owes Midge and Keith Edwards a huge debt of gratitude for they supply not only story ideas but are a wealth of information about most stories that involve old times. Thanks again Midge and Keith!

Wallace Stegner aptly describes history as being like a pontoon bridge with each episode leading to another. This story about "The Mountaineer is missing some episodes. Probably we never will know all the history of the newspaper and the effect it had on the area.

We do know that at first it was called "The Bear Paw Mountaineer". Looking at the front page of the first issue, there are grainy photographs of the owner and his wife, Mr. and Mrs. Paul R. Flint. The caption each photograph says, "As we Appear".

The first location of the Bear Paw Mountaineer was in a building belong to Hans Lehfeldt, south of the Spokane Hotel. That would put the newspaper in the vicinity of the present Sheehy Law Office

Stories in the first issue include a story of Judith Stage Driver reporting a hold up of two homesteaders. Then there is this: "A good idea which has been a help of many towns is to have a motto on the envelopes of every business man wherever that mail of yours goes, they will know that we mean business. Make Big Sandy a tow of 10000 inhabitants in 1912. If every merchant would have this printed below their return card, it will be urprising the amount of good it will do. This can be done as well as not if we pull together. Let's make Big Sandy town of 1,000 people in 1912"

Then in June of 1911, there was this. "Through the courtesy of Hans H. Lefeldt, the Mountaineer office space has been doubled. Now we have ample when you call, also a good rocking chair, so come and talk it over. We had things to move, an oat bin with 30 or 40 bushels of oats among other things. Those of you who think an editor never sweats should have seen the honest drops dripping from our brow. However the change is well worth the labor and the few cuss words that were emitted during the job. "

Her is where the story gets a bit murky. What we know thanks to Midge Edward's efforts is going through old "Mountaineers" is the following:

1911 Paul Flint was the owner and editor. Later that year Flint and JH. E. Mahood are listed. This it is just Mahood through November.

1921 C. C. Mills started as editor. In 1927 he was appointed postmaster. Keith Edwards states that during those times being postmaster was sort of a perk for newspaper owners leading one to think that more than one salary was needed to keep a newspaper operating.

1933 Frank Lee worked as editor with Mills or by himself for a couple of years Lee was also postmaster. Keith Edwards says Lee got into some difficulty at the post office and had to leave town.

1936 Mills is back to being editor by himself.

There are missing Mountaineers during the 1940's. Keith Edwards thinks that during that time a man named Callahan may have been the editor of the paper.

1971 Jim Rettig bought the Mountaineer and took over as editor and owner.

2009 Keith and Keri Hanson took over the Mountaineer as owners and editors.

2019 Lorrie Merrill bought the Mountaineer and became the editor as well.

Almost as confusing as owners through the years are the various o0cations of the Mountaineer. We know it started out next to the Spokane Hotel. Here is what else we know. By no means is this list complete.

1914 The newspaper moved across the street from Big Sandy Auto to where Faith Lutheran Church is today.

1980 The Mountaineer moved into is present location a building that started out being called the "The Wheat Bowl" It was a bowling alley for a time, then a youth center and in 1966 it became Kaste's Grocery Store (F and M Grocery). In 1973 the grocery store closed, and the building became a subsidiary of Rockman Funeral Home of Chester until the Mountaineer moved in, November of 1980.

Through the years, in Looking Back columns, often "The Mountaineer" sort of tooted its own horn by mention things going on at the newspaper.

1913 a new Campbell press is installed at "The Mountaineer". Instead of taking a day and a half to run an issue, it now takes about an hour and a half with the help of a Waterloo Boy gasoline engine.

1915 a desk phone was installed, and we now feel that we are more closely connected with the world.

1916 it was noted that with the February 27th issue, the paper is five years old.

1916 The paper was equipped with a new Mentges folder which will save about two days' work for three men.

1918 "We regret to chronicle the death at Great Falls yesterday of Mrs. H. R. Flint, wife of the publisher of this paper, the immediate cause of death being pneumonia superinduced by influenza. She had been an inmate of the hospital for 10 days and sufferer from the dread scourge. Mr. Fint is at present an inmate of the same hospital suffering with pneumonia and yesterday morning the little son, Bobbie, was taken there supposedly with the influenza

1919 The Bear Paw Mountaineer is letting people know that no longer will they receive the paper unless they pay in advance. "we can no longer afford to carry accounts."

We learn in the July 17th issue that there was another newspaper presumably in Big Sandy by the name of The Public Opinion. The Opinion and the Mountaineer join hands for life. The editor of "The opinion bids farewell.

1923 it is announced that the Mountaineer is machine set with a linotype in (its) own office. This is a long stride forward in our effort to give Big Sandy a newspaper that will compare with any of the small-town papers.

1934 Grant Courtnage and Frank B. Lee drove to Havre and brought back a proof press for the newspaper.

1935 One issue in November speaks for itself. "A heating element burned out in our linotype melting pot this week so we had to finish setting type by hand. Consequently we are forced to omit some local news. This along with the bad weather put the Mountaineer force in rather bad temper.

1950 The National Board o fire Underwriters, New York, announced that the judges of the weekly newspapers had selected the Mountaineer for the National Board's Gold Medal Award for the outstanding public service during 1949

1966 "The Mountaineer" had to raise its out of town rates to four dollars per year.

1973 "For the first time in our 62 year history the Big Sandy Mountaineer is the Official Newspaper of the Chouteau County after winning the bid to all legal publications, county printing, and supplies."

1974 The Big Sandy Mountaineer captured over one fourth of the first place state wide awards presented during the 1974 Montana Press Association Convention last weekend at the Colonial Hilton In Helena.

1984 "The Mountaineer" received a new sign. It was presented as a gift to Jim and Terry Rettig, owners-publishers of the firm, it was also given in the spirit of aiding those who can't find the office! The handcrafted sign is the work of Leo and Irene Savoie of Loma.

It is hope from the Mountaineer that they can make the newspaper so important as to be a vital member of the family for all who live in this part of Montana.