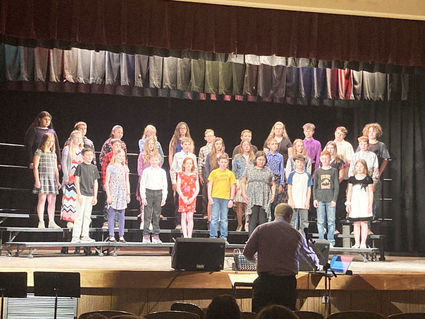 Before the Wednesday concert, I asked Heather Wolery, the school principal, her thoughts on the live performances. "It's wonderful! I wish we could have done a normal, in-person, at night concert, but it wasn't planned that way. Mr. Bond is doing a wonderful job. It's going to be a great concert"

The event was planned early in the year and restrictions loosened significantly as the date drew closer. "We were starting to open things up between our school and other schools, especially with track and basketball. They allowed pep bands to be at divisional. If we are allowing a pep band with an audience, then we certainly could have a regular concert," explained TJ Bond, the music teacher for Big Sandy Schools. "The original plan was to do a 'streaming only concert', but with the loosening of the rules we were able to do a live show. Talking with the administration, as things got closer and the mask mandate was lifted, the decision to allow a live audience for the concert was made." Unfortunately, the decision came too late to reschedule the Elementary concerts to the evening, but it did allow for live attendees.

Mr. Bond explained that the kids were energized by the prospect of performing for their parents: "The kids like the fact that they get an audience, too. Especially this group, the kindergarten through 3rd, with some of the younger ones having their first concerts; this is a big deal. I'm really glad that we can have an audience so they can have that moment. 4th through 6th had the same sort of experience, especially with all the work they put in this year. I'm really proud of the kids for all the effort and work they've put in. I'm excited to have an audience again. It means a lot to me to see so many folks come out, even with all the weird things we had to do this year."

Last Wednesday (the 5th), the 4th through 6th grade students took the stage at Big Sandy High School to perform for their families and guests. The first half of the concert featured the grades playing instruments they are learning in music classes, with many students displaying their individual progress through solo, duo, or trio performances. In addition, students played piano and other instruments for the audience. The concert ended with the grades singing. The kindergarten through third grade concert was on Thursday and consisted of the children singing for parents and piano solos. Both events were well attended. Both concerts happened during the school day, but quite a few parents came out to watch their children perform.

Mr. Bond also explained that as long as nothing changes, future performances will likely remain live and return to the usual evening time slot. Fortunately, the change came in time for the final Elementary concerts for the year.