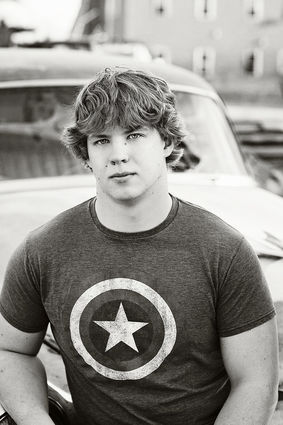 The 2021 recipient of the $500 Duane Olson Memorial Athletic Scholarship is Kade Strutz, son of Kurt and Cheryl Strutz of Big Sandy. This award was established in May of 1997 by Jim and Marla Ray in remembrance of Duane Olson who graduated from Big Sandy High School with Jim in 1967.

The criteria for this award are that a senior student must excel in two or more sports, participating at the State level, throughout their high school career, carry a minimum 2.00 GPA, and be recognized as the most outstanding athlete in the school.

When Duane graduated from Big Sandy High School, he was considered one of the top prep athletes in Montana, having claimed three consecutive state titles in wrestling at 145 pounds under the guidance of Coach Fred Salmonsen. In those days, wrestlers competed in an All-Class championship made up of all AA, A, B, and C schools from across Montana. Duane was a natural athlete, outstanding in football and track, as well as a good student. But wrestling was where he found his niche. His three state championship matches were against wrestlers from Billings, Missoula, and Great Falls. He was awarded the Outstanding Wrestler of the State Tournament his senior year while leading his team to a State Championship.

Upon his graduation from high school, Duane signed with one of the most prestigious wrestling programs in the nation at Iowa State University. Dan Gable, future Olympic gold medalist in wrestling and future Iowa State wrestling coach, was Duane's practice partner. Duane had a great freshman season on the mat, placing 4th in the Big 8 Conference tournament and 2nd in the Great Plains tournament. In his Sophomore year he wrestled in the NCAA National Wrestling Tournament where his team took home the NCAA National Championship Title.

Unfortunately, a tragic accident took the life of Duane's younger brother Ron while they were haying in July of 1968. Duane felt responsible, and his life was changed from that point. He returned to Iowa State for his Sophomore year, but he did not finish college. He did not settle down. He did not forgive himself. In February 1976, less than 9 years after his high school graduation, Duane died alone in a house fire.

Even though Duane's life was cut short, his name is well-remembered among sports-minded people across this state and beyond. In 1996 Dan Gable flew to Great Falls to make a presentation to Duane's parents, Walter and Virginia Olson, and family, commemorating Duane's impact at Iowa State. In 2000, when a selection of the top 100 athletes in Montana during the 20th century was compiled, Duane Olson's name was on that list for the year 1967. That distinction is remarkable!

In January 2020, Virginia Olson received word that her son Duane was being inducted into the Montana High School Association's Athletic Hall of Fame, yet another prestigious honor for this somewhat shy kid from Warrick, Montana, whose first experience with competitive wrestling came on his first day of practice as a Freshman at Big Sandy High. He narrowly missed qualifying for state that year. For the next three years, he never lost a match! Duane made a lasting mark on Montana's Sports scene, and we are proud to give this award to worthy athletes from Big Sandy High School in his honor.