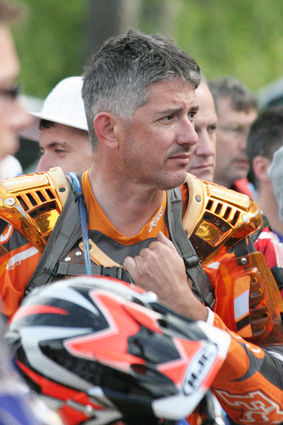 Thomas William Bernhardt passed away unexpectedly in St. Cloud, Minnesota on May 13th, 2021 due to a bicycle accident. He was born in Racine, Wisconsin on February 9th, 1964 and called many places home.

Tom, affectionately known by his family as Dude, was raised in Racine, Wisconsin. He graduated from St. Catherine's High School in 1982. He pursued his Associates of Science Degree in Dairy Herd Management from the University of Minnesota- Waseca, graduating in 1984. After college, Tom spent some time working in Mora, Minnesota on a dairy farm when he met his wife, Bonnita Bernhardt (Lietha).

Tom and Bonnita married on November 28th, 1987 in Racine, Wisconsin and relocated to Sauk Rapids, Minnesota. They were blessed with their daughters, Elizabeth and Brianna, both born in St. Cloud, Minnesota. Tom was a grateful stay at home father for many years. As the owner and operator of Thomas Bernhardt Photography, he took a very active role in raising the girls while capturing memories through photography. Tom was also active in the local Rotary Club and Muskies Inc.

As the girls grew up, Tom made a career move and signed on with UPS, where he maintained a strong safe driving record throughout his 20+ year career. He found a renewed passion for motorcycles and bicycles, and he shared this passion with his wife, daughters, and friends. As an active member of the ADV Riders, he had many friends near and far. Tom never knew a stranger, and his company was appreciated by all.

Tom was an avid storyteller, making him the life of every party and conversation. He enjoyed good food, good coffee (until he gave it up for his health), and a good audience. He also had a mysterious passion for gas station sushi. Despite living in Minnesota, his mastery of the grill earned him the title of barbeque pit master for his deliciously prepared ribs, brisket, and other "low and slow" meats. He has been a friend of Bill W for over 31 years.

His children were his pride and joy. When his youngest daughter, Brianna, moved to Big Sandy to teach high school agriculture, you could not have found a more proud father. He loved having coffee and pastries at Bear Paw Coffee Shop and Deli. He enjoyed telling everyone about the Big Sandy Chainsaw Massacre. He considered Mark and Cheryl's house on the prairie his second home and enjoyed every minute he spent there.

His eldest daughter, Elizabeth, earned a physics PhD and now sells lasers to the government. Unfortunately, the lasers are not made for sharks, a feature Tom consistently advocated for.

Dogs brought joy to Tom's life - he has many photos of dogs he met delivering for UPS. He doted on his chihuahua- dachshund mix, Polly, playing fetch, taking her on car rides, and spoiling her while waiting for the birth of his first grandchild Kimberly Marie. Bella, another mini dachshund, also enjoys the good life, just at a more leisurely pace.

A celebration of life was held in St. Cloud, Minnesota and Racine, Wisconsin, simultaneously, on May 13th. Celebrations continue across the state and country in his name. Donations in his name can be made to the Tri-County Humane Society at their website: (https://tricountyhumanesociety.org/how-to-help/donate/overview.html)