The Masons' Kindles for Kids program 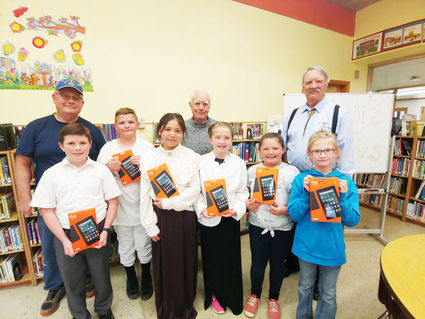 6 students at FE Miley Elementary received Kindle readers as prizes for their participation in the Bikes For Books/Kindles for Kids program. Every year 3rd, 4th, and 5th grade students participate in the program by reading books and receive tickets to enter a drawing at the end of the year.

Mr. Thorton explains the program and how it encourages kids to read more: "The Masons offer their program to encourage the kids to read books. It's nice to have somebody other than the teacher saying that you gotta read books. A few years ago, they started also giving Kindles instead of bikes... It's good; it gives kids another reason to read. Even if they only get one book read, they still have a chance to win. A number of times, we've had just one ticket winners. Then, the next year they get going a bit more." For every book a student reads, they are entered once in the drawing. This means that the more a student reads, the more chances they have to win.

Terry Grant came to the school during the Open House Extravaganza to hand out Kindle awards to students. "We started it to encourage the students to read. The Masons saw the importance of that. So it started out that they invested in bikes; the lodges paid 50% and a foundation that is set up for that purpose paid the other 50%. For me personally, it started up in Havre. We dealt with 11 schools. We gave 2 bikes to each school. Down here, we have done the program with the school since I got here, and likely before I got here."

The decision to give bikes or e-readers has changed from year to year in Big Sandy, but was ultimately made by the students. Mr Thorton explains: "One year we did both, bikes and Kindles. Then the next year, they went back to the bikes for each grade. This year, they had a choice. You could get a bike or a Kindle. The majority of the kids would rather get the Kindles than the bikes. So they decided they were going to give 2 Kindles for each class. Two kids in each class had a chance to win a Kindle."

Before handing out awards, Mr. Grant took the time to talk with students about their experience reading and what they gained. "Today, one kid talked about what he got out of his books, which was that it helped him improve his grammar. Another girl talked about how it helped with her spelling. There's no limit to what a student can get out of reading. Their enjoyment and the places they can go without leaving their home. One young lady told me today that reading took her to the waterfalls in the mountains. Their imagination is the limit and books trigger that. We want to keep that going."

Students were excited to receive their prizes. Mr. Thornton summed up how the kids benefit from the event: It's an effective program. I know a few kids that wouldn't have read the books they did if they didn't have that program going for them."

The Masons also distribute reading related scholarships to High School kids in a sort of sister program to Bikes for Books. Students apply for the scholarship, which is awarded in April every year.