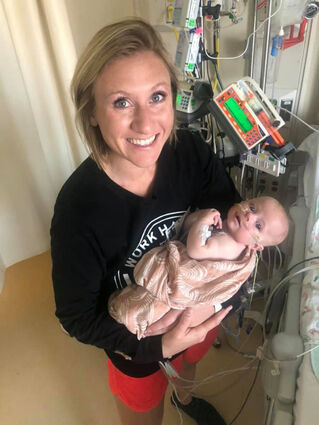 Autumn Stauffer, the four month old daughter of Caleb & Hannah Stauffer, underwent a second heart surgery August 23rd to treat a heart condition she was diagnosed with in utero. Most people around Big Sandy are familiar with Hannah, but know her by her maiden name: Hannah Anderson, daughter of Brook and Renee Anderson. Hannah and her family are well loved in our community and have made an impact on the lives of many people.

Autumn is Caleb & Hannah's second child and has already been through quite an ordeal in the first 16 weeks of her life. Hannah explained that they were originally planning to have their baby with a midwife, which they had done previously with their son, Jordan. That changed after they went in for their mandatory 20 week ultrasound. The test failed to get any good images of the baby's heart, so a follow up was scheduled for 27 weeks. "She (the sonographer) spent a lot of time looking at her heart, which very much confused me.... my mom, 2 year old son, and husband Caleb were all with me. Buffy (the sonographer) then told me that she was seeing some things that were concerning. She said she saw a little hole where it shouldn't be, and that I would need to go to the hospital where they could ultrasound it more directly."

"Caleb and I were shattered... You hear of things like this happening, but you never dreamed it would be you... We cried together and with our families, then we walked. We gathered people around us to pray with us and for our girl and pressed into Jesus, our only hope! The weeks that followed blurred together for me.

As the story of baby Autumn's health concerns spread, Hannah explains that encouragement and support has been a constant companion: "God has truly blessed us with a huge army of people who have rallied behind us and stood in the gap both in prayer and physically... We are constantly receiving encouragement: either notes or calls or a financial gift to help." That support has helped to strengthen the family and made it possible for Caleb to spend a lot of time with the family in the hospital.

"At 32 weeks, we went to Denver to have more ultrasounds (they also diagnosed her the same) and to set up a birth plan. We would move to Denver at 37 weeks with a plan to induce at 39 weeks." Autumn was born at 38 weeks when her movements became less consistent. This gave doctors an opportunity to do an echocardiogram directly on the baby, which revealed that the initial diagnosis was wrong. Though they weren't able to diagnose the problem directly, they were able to come up with a plan for treating her.

"After 12 days of waiting, they presented their plan to us. The first surgery (on May 11) was to put a stent in and PA (Pulmonary Artery) bands to let her grow. She passed with flying colors. And truthfully did way better then they ever imagined. We were discharged sooner then they expected, but we were told we would have to stay in Denver until she was 3-4 months and could undergo the big repair."

Autumn went home with the Stauffers for the first time at 27 days old. She was even able to travel to Montana for 4 days to attend the wedding of Justin Anderson, Hannah's brother. Autumn's second surgery took place on the 23rd of August. She was on the heart bypass machine for 255 minutes while doctors repaired the problems with her heart. The surgeons explained afterward that from an anatomical view, the surgery couldn't have gone better. Though baby Autumn will need further surgery sometime between the ages of 3 and 5 to replace artificial pieces that will not grow with her.

"Autumn is a bright-eyed, happy girl and loves the constant attention. Jordan adores her. We are so thankful... She will be able to do everything any other little girl can do like run, play and do sports. She will always have a cardiologist with check-up Echocardiograms, and hopefully, only one other surgery."

Hannah explains her perspective on the future with their daughter: "The road ahead is ever-changing, but we serve a faithful God who has promised that He who began a good work will complete it. What Caleb and I find deep comfort in is that God formed Autumn with a unique heart for a special reason. Although this itself is not good, in fact, it feels like at times we may suffocate, He is good and is working it all for His divine glory. In Him, we hope. In Him, we rest."

The Stauffer family is still in the Cardiac Intensive Care Unit, but they are looking forward to the time they will be able to take their little girl home. "Our normal life may change slightly, but often times, I find God brings things in your life to help you refocus and grow you."

"I was widely told that soon this will be a memory. What a story this little girl will have to tell. All Glory be to Christ."