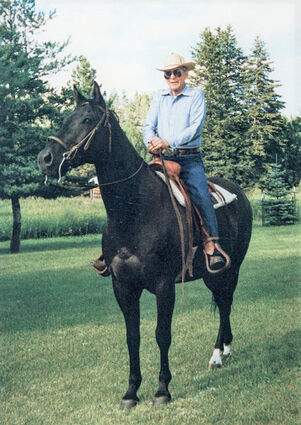 Lawrence Byron Green, 92, passed away peacefully of natural causes at the family ranch on August 26, 2021. Cremation has taken place and a service is not scheduled at this time. Holland and Bonine Funeral Home has been entrusted with arrangements.

He was born January 30,1929, in Havre, Montana, the oldest son of Lawrence John and Sevrie Williamson Green. Lawrence attended schools in Havre and graduated with the class of 1947. He later went on to earn his teaching degree from Northern Montana College. He was a Korean War combat veteran and returned to Montana after the war. He married Helen Cornelius McNamara on August 22, 1953, and had four children, John, Harry, Shannon, and Stefani. Over the course of 32 years, Lawrence served as the librarian and taught English and History at Big Sandy High School. His senior term paper assignment is well remembered by the students he taught. He maintained a small ranch in the Bear Paw mountains and enjoyed riding good horses. Lawrence was preceded in death by his parents, his brother Harry, his daughter Shannon, and his granddaughter Teonna. He is survived by Connie, his wife of 68 years, his children John, Harry, and Stefani, seven grandchildren, and seven great grandchildren.