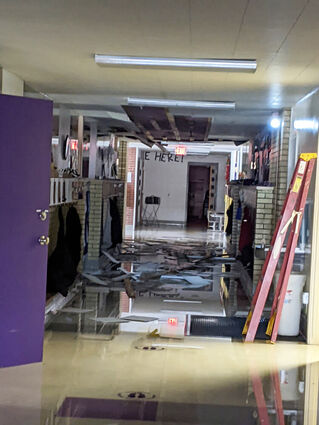 Big Sandy Public School students received an unexpected extension to their Christmas vacation when the plumbing in the elementary school burst on Sunday,January 2nd. The cleanup and repairs were initially completed Monday around midday, when a second burst pipe was discovered further down the line. The repairs for the second issue were completed Tuesday afternoon and classes resumed Wednesday.

The first pipe burst sometime Sunday morning. PrincipalHeather Woolery explains the sequence of events that morning: "Charlie came in and checked the boiler earlier that morning and didn't notice anything. Later, they came back to move snow. When he came back in, it was raining water down in the hallway. It was probably Sunday morning at 10ish." On Sunday, the weather was warmer, with temperatures falling well below zero during much of the Christmas break. "It was warm Sunday and Monday, which was the problem,I believe. It had frozen and as it warmed up, it burst."

Heather explained that their first step in dealing with the damage was to call TJ Overcast, with Overcast Restoration. "Chester had had a pipe break also, so he had somebody coming from Chinook to help us suck all the water out and somebody would be in from Chester when they got done there. They got here around lunchtime to start. First, you have to get all the stuff cleaned up and the water out. Then, you have to assess the damage, then you have to fix it.

"Restoration came and cleaned it all up Sunday, put out the dryers and the blowers and the dehumidifiers. Raymond was here early Monday morning, and he called in Larry Cline, who is out of Fort Benton. He had the piece that could fix the break that we found. Then they turned the water on Monday at about noonish again. They found another break further down, so we had water again TJ happened to be in town that day, so he came over to scoop that water out. Then they fixed that part. By Tuesday, the plumbing was all fixed. The water was back on, the boiler was back on, and at that point, it was just getting things cleaned up. Scott Sargent (one of the custodians) spent all day Tuesday cleaning, from early in the morning. It was just him, and he was happy to do it. Everybody else was busy getting everything else ready for school to be back in session. There was snow to be removed and other issues."

Heather repeatedly expressed the school's appreciation for the custodial staff and their hard work getting the facility cleaned up and repaired in time for school to resume midweek. Charlie Sipler, Randy Bowen, and Scott Sargent all put in long hours dealing with the mess. "Mostly the janitors cleaned it up. They are pretty awesome."

There wasn't a clear cause for the break this year, though Christmas break was significantly colder than in past years. With the school closed, less water moved through the system, giving the pipes an opportunity to freeze over. Another potential contributing factor may have been the damage the school roof experienced during the high wind storm last year. Some of the insulation may have been damaged at that time, leaving less protection for the building. These are speculations, though the "perfect storm" of weather conditions and school closure is certainly the main culprit.

With the plumbing repaired and the mess mostly cleaned up, the question arises regarding when the ceiling will be repaired. Heather explained: "I think the struggle is that we are going to find lots of things for weeks and months ahead that we didn't know. Like the soffits above 4th and 5th grade were just full of water and it had to go somewhere, and where does it go? The speech room had this awful smell in it Tuesday, like a dirty diaper smell. There was a rug in the back corner of the room. There was no water in the room otherwise, but apparently water had made it all the way into that back corner and made that rug wet and it smelled. So, water went places we don't know about. Probably long term, for the rest of the year the hallway will look like it is now, just because there isn't enough time to get in and replace the ceiling. Plus, I think the other thought is to keep everything open for as long as possible to make sure it's all dry and all the water is out."

Th damage was mostly limited to the ceiling and plumbing, apart form a few fried laptop charging cables. There is the possibility that some of the flooring, which was recently replaced entirely, will need to be replaced. "It could've been a lot worse. We are just fortunate that we have a good crew of people. And it was fortunate that TJ Overcast was happy to help, and that we have a good relationship with him and with Locke Electric, who came out and got our lights working. It's also fortunate that Raymond knows what's happening in the school and was willing to help and had connections with Larry Cline." 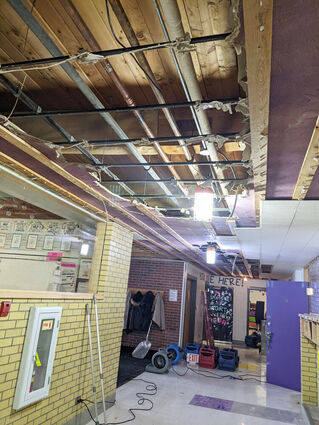 When I asked about the expenses associated with repairs, Heather remarked: "That's why we have insurance, because it helps us with those sorts of things." Many parents have asked about making up the days missed. Heather explained that, for the moment, they will be treating the missed school days as "snow days", which will not need to be made up.