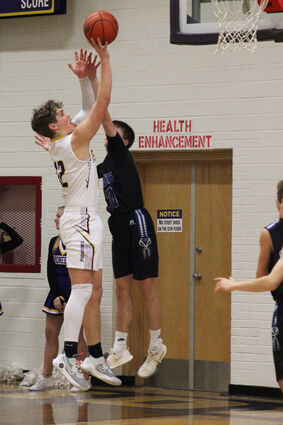 On Friday, in a highly anticipated contest against the Box Elder Bears, a team that put one of the few blemishes on the Pioneers season. In the contest, both offenses continued to go right at one another in the first quarter with many points. After one-quarter of play Box Elder would be holding on to a 2-point lead. In the second quarter, the hot shooting for the Pioneers would continue. Still, every time the Pioneers would try to jump out and extend their lead, the Bears would answer back with a run of their own to keep the score close, but the Pioneers would take the information early in the second then never give it up the whole contest. At the half, the Pioneers had the 40-36 advantage. In the second half, the Pioneers started to put the pedal down and did just that. Another huge factor in keeping the lead was down the stretch. The Pioneers were knocking down free throws; even though, as a team, they shot 59 percent from the stripe, they made the ones that counted. After three quarters, the Pioneers led 59-53, and in the fourth, with some hard-fought defense and taking care of the ball, the Pioneers would go on and pick up a huge win at home that they needed to hold that one seed in the 9C. Final Score Big Sandy 82 Box Elder 71. In a great night where the Pioneers would put four in double figures, Kody Strutz would lead the way with 23 points, including a solid 10-14 from the free-throw line. Braydon Cline would put in 19 points, and 8 rebounds, both Wylee Snapp and Lane Demontiney would chip in 18 apiece. 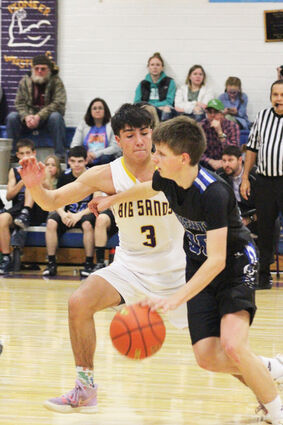 Saturday's contest which would be the final home game for the Pioneers would set off against the North Star Knights. To open the contest, the Pioneers would come out flat and shoot cold from the field, and the Knights were on shooting the ball, as North Star would end the first quarter of play up 15-11. A few adjustments on defense were made, and the Pioneers still could not get anything rolling on the offensive end of the floor; a few North Star three-point baskets would see the Pioneers down by 9 going into the half with a score of 30-21. In the second half, a whole different Pioneer team came out to play; The Pioneers would put full-court pressure on the Knights team and would start to force turnovers and cut into the lead after a big three-point basket from Junior Braydon Cline to end the third quarter. North Star would have the lead 43-37. In the fourth, the pressure would hurt the Knights as they had 27 turnovers on the night. With two minutes to go in the contest, North Star would barely cling to a 4-point lead; Junior Braydon Cline would take it to the rack, finish through the contact, and get the foul, cutting the lead to two points but missed the free throw. The Knight would turn it right over in the following possession, and the Pioneers would convert on the other end to tie the game at 55 apiece. Following another stop from the Pioneers, Sophomore Wylee Snapp would lay one in through traffic to give the Pioneers their only contest lead. One more stop and two big free throws from Cline would seal the deal for the Pioneers as they pick up a win in which they had to battle adversity from a tough first half and be able to bounce back and find ways to pick up the W. Final Score: Big Sandy 59 North Star 55. The Pioneers were led by Braydon Cline, who had a huge night with 35 points and an impressive 14-17 from the charity stripe. Both Strutz and Snapp would add in 9 apiece, and Demontiney would round out the scoring with 6. The Pioneers move to 13-2 and 9-2 in 9C conference play. Next week the Pioneers will be on the road for the three final games of the season, Tuesday against Hays-Lodgepole, Friday night against Turner, and Saturday, a huge game for the Pioneers against the Hawks of CJI.