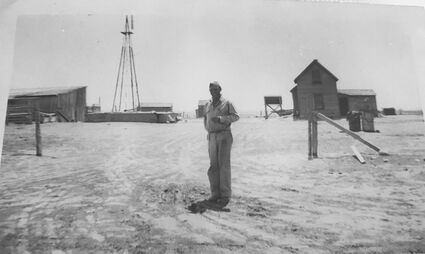 Last week, I spent some time reading the earliest issue of the Mountaineer that is included in the online database of newspapers. I recounted a few of the articles for context on just how old the paper was before diving into the front page editorials opining on the future of the town. One of the articles I touched on was about the Heiberg family arriving in Big Sandy from Grand Island, Nebraska to homestead west of town. Friday evening, I got a call from Jay Warrall. He spotted the Heiberg name in the article and remembered that the arrival of the Heiberg family tied to his own family's move into the Big Sandy area. Our conversation and the subsequent research offered a bit of a glimpse into our town's early history and even more context for how Big Sandy came into being. It was also very interesting, so I figured it was something I would share.

He explained that his grandfather, Mike (Meinhard) Lorenzen initially came to Big Sandy with Fred Heiberg. The pair were friends in Grand Island and Mike agreed to come to the area with Fred to work and help set up a homestead. According to the "Gathering of Memories" history book, Mike accompanied a train car loaded with equipment, horses, a cow, chickens, and machinery. Those materials were used by the Heibergs to establish their own homestead. Apparently he worked with Fred for a while before returning to Grand Island to make arrangements for his own animals and equipment. Part of the reason Jay's grandfather came with Fred was because Mike was only 20 years old and therefore ineligible to file a patent to claim a homestead. He worked here for a time, eventually returning home when he was nearly of age to acquire supplies, equipment, and animals. This included borrowing money from his brother-in-law to purchase draft horses. In 1911, he arrived in Big Sandy again to stake his claim and start his life. It is interesting to note that the Lorenzen family had come to Grand Island from Denmark.

The arrival of the Heibergs and Lorenzen families in Big Sandy coincided with one of America's last homesteading booms. The Montana Homestead Acts of 1909 and 1912 kicked off the boom by offering 320 acres of land to homesteaders for free, providing they could "prove up" the land in the first three years of occupying it. Prove up referred to building a home and improving the land. In addition, unallotted land on Indian reservations was opened for claims and land speculators began buying and selling property in the area. The Great Northern Railway contributed to the boom by selling cut rate tickets to transport families and supplies west and advertising campaigns boasted of the miracles of modern dry farming/irrigation technique, which would make farming the region profitable. The boom doubled the population of the state from 240,000 to 550,000 in the space of two decades. The land offices in Great Falls routinely processed over 1000 new deeds a month. Around the time of Fred and Mike's arrival in the area, the railroad disembarked as many as 250 homesteaders at a time in Havre. This is certainly the reason for Big Sandy's quick growth in 1911 and the newspaper's optimism regarding the future of the town. In a sense, our little community was a boom town for families receiving free land to start their own farms. (This information taken from "A Traveler's Companion to Montana History" by Carroll Van West)

Over the long term, the Heibergs eventually returned to Grand Island (as well as other areas based on their relation to the Larsen family through a marriage that took place in 1916). The Lorenzen family, on the other hand, stayed on. Mike drilled a well on his land in 1912, which is remarkable considering how few wells exist west of town. This freed him from needing to haul water to his home from the Marias River, which Jay explained was done with a team of four horses, a wagon, and a wooden tank. Though, when he married his wife Hazel in 1918, he returned to hauling water again as his wife could not tolerate the well water for drinking or cooking due to the excess of salt in the water.

The family raised cattle, which Jay explains was mostly Hazel's doing. Mike set out to raise draft horses to sell to the surrounding farmers, as many did not have adequate horsepower to pull plows. He also hired out to work ground for other farmers. This was a good plan considering how few of the homesteaders had horses or the money to hire tractors to work their property. The money used to purchase his first team was borrowed from his brother-in-law with the understanding that if it could not be repaid in cash, it would be paid in horses. Mike only managed to sell one team of draft horses, so he wound up shipping loads of horses to Grand Island to repay the loan. The final team of horses was delivered to Grand Island in the mid-1930s. 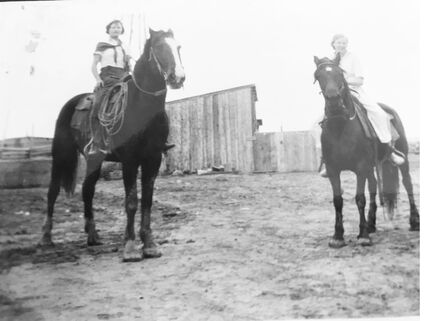 The family spent most of their lives ranching on the prairie, apart from 3 or 4 years spent in North Dakota not long after they were married. A drought forced them to move to Hazel's father's farm from 1919 to 1923. The spell of dry weather seems to have driven more than a few homesteaders out of the area. Mike and Hazel eventually returned to the area because of Mike's aversion to the particularly severe winters in North Dakota. The couple had 2 children: Florence M. (Lorenzen) Worrell and Lewey Lorenzen. Florence is Jay's mother.

Jay shared a few interesting stories with me about his grandparents. This one he found in the Old Timer's column in the Mountaineer a few years ago. "Mike and this other guy shipped in a carload of hay, I'm sure it was 1919. You unloaded it in Big Sandy and then you still had to haul it 20 miles to the animals west of Big Sandy." Given the rough conditions of the roads, and the use of horse drawn wagons to haul everything, this would have been no small feat. Mike didn't buy his first truck until 1927 (it was a Chevy). A more complete Lorenzen family history can be read in The Gathering of Memories book.