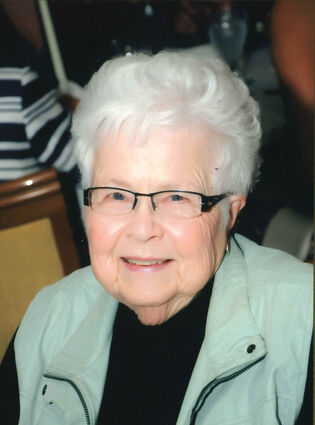 On April 3, 2022, Dorothea Louise (nee Stammler) Quinn, beloved wife, mother, grandmother and great-grandmother, neighbor and friend left her earthly home to join her Father in Heaven and be reunited with the love of her life, Mack. Dordy, as she preferred to be called, was born in Johnstown, PA on Nov. 4, 1923. She had one older brother, George and was the daughter of George and Elsa (nee Bojunga) Stammler. Dordy spent her grade school years in Bethlehem, PA and her high school years in Summit, NJ near New York City. In 1943, she graduated from Marjorie Webster's Junior College in Washington DC and then joined the Navy. While stationed in Charleston, SC in 1946, she met and married a Navy guy from Montana - Mack Quinn. After the war, Mack worked for Westinghouse in Atlanta, GA where their son, Bob was born. In 1948, Mack brought Dordy and Bob back to his family's wheat and cattle ranch SE of Big Sandy, Montana. There, this Eastern city girl learned to cook on a wood stove, iron with a flat iron and deal with batteries and a wind charger that produced "very little electricity." She adapted well to farm life, learning to drive trucks, help with the cattle, cook for the hired help and harvest crews, as well as shoot rattle snakes, prairie dogs and skunks. However, on the advice of an elderly neighbor, she never learned to milk the family cow. Every two years, their home turned into the local Republican headquarters as she and Mack were actively involved in the election campaigns. She loved playing bridge, being a member of the Lone Tree Women's Club and following her two kids in all their school activities and helping out whenever a need arose. She was a regular chaperon for music and speech meets. She also was active in Farm Bureau, Eastern Star, Daughters of the Nile, as well as the American Legion Auxiliary, PTA and local church activities. After Bob came back to take over the farm in 1978, she and Mack moved into Big Sandy. They eventually bought a home in Sun City West, enjoying their "Golden Years" in Arizona during the winters. Dordy played in many bridge groups and loved bocci, a lawn bowling game. She was a member of Questers, an organization dedicated to preserving the past for the future. She and Mack also were busy with neighborhood projects and church activities. Both had joined the Church of Jesus Christ of Latter-Day Saints later in life and were active in church as long as their health permitted. In 2007 they sold their Arizona home and moved back to the farm, eventually moving to Great Falls in 2012 and into Grandview assisted living in 2014. Mack passed away in 2015 just short of his 94th birthday and their 70th anniversary. During the past few years Dordy continued to play bridge up until last fall when she turned 98. She enjoyed the activities at Grandview and visiting with her kids, grandkids and great-grandchildren. She had a very long, fulfilling and happy life as a homemaker and community volunteer. She loved visiting and socializing with a host of friends who will certainly miss her cheery disposition. She is survived by her children Bob (Ann) (Big Sandy) and Debby Blyth (Great Falls); 6 grandchildren, Allison (Jerry) Taylor (Havre), Penny (Brook) Walker (Ferndale, WA), Holly (Sean) Knighton, (Afton, WY), Trevor Blyth (Erica), (Missoula), Bridgette (Andrew) Long (Great Falls) and Adam (Kat) Quinn (West Lafayette, IN) and 20 greatgrandchildren. She was laid to rest in the family plot at the Big Sandy Cemetery in Graveside Services April 8, 2022 at 2:00 PM with military honors. Memorials may be made to the Big Sandy Library, Big Sandy swimming pool or the charity of one's choice.

Condolences may be shared with the family at http://www.croxfordfuneralhome.com