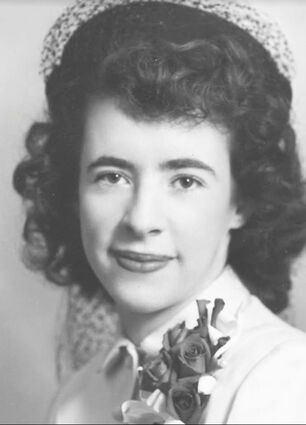 Jessie (MacKay) O'Malley, 93, passed away after a brief illness on April 1, 2022. Jessie was born to Norman and Margaret MacKay on February 19th, 1929, in Savoy, MT. Jessie and her brothers attended a one-room schoolhouse, then attended middle school in Chinook. Jessie graduated from Havre High School in 1947.

As a young girl, she learned to embroider, crochet and sew. Her thread stitched the warmest pajamas, holiday dresses and colorful Halloween costumes. Her customized blankets were especially dear to anyone lucky enough to receive one. She was a talented and resourceful homemaker. She could serve a feast to any number of friends and family during any season, and with little warning. As a young woman, she worked as a telephone operator. She enjoyed attending country dances held out in the Bears Paw Mountains. She met her future husband, John O'Malley, at one of those dances. The pair created a swing step they called the "Warrick Waltz".

In September of 1950, she began a life as a schoolteacher's wife and became her husband's best substitute teacher. During the summers, they lived in Missoula while John attended graduate school. They moved several times in their fifty-eight-year marriage, eventually settling in Havre. She gifted her creativity and wit to her three children. All of her children and four of her grandchildren became teachers. She was most proud to say that when the years in classrooms were combined, her husband, children, and grandchildren served over one-hundred and forty years as teachers; but we all knew she was the best teacher. A visit to Grandma's house always included a lesson in humor and Pinochle. Grandma always led the group in an "Over-Bidder" chant for arrogant players. Jessie was a devoted grandmother. She made holidays magical with cookies, and extra surprises in Easter baskets and Christmas stockings. She traveled numerous miles along the Hi-line and central Montana for her grandkids' sporting events. She always had snacks ready when family traveled to see her. She made sure to tell you, with little delicacy, that your outfit or hair needed adjusting. When you needed a dose of reality, a push to finish a class in college, a big test, or support for an important sporting event, Jessie was there to make sure that failure was not an option.

Jessie was preceded in death by her parents; her husband John; her oldest daughter Peggy Fink; son-in-law Bart Fink; and a brother John.

She is survived by her daughter, Patty (Ken) Rice and her son, Mike O'Malley (Rhonda Burghardt); and brothers Murdo (Ilo) and Norman D. (Sharee).

Her humor and spirit will be carried on by her six grandchildren and four great-grandchildren.

Services will be held at Highland Cemetery on Saturday, June 25th at 10:00 a.m. Reception to follow at the Best Western Plus from 12:00 p.m. to 5:00 p.m. Please visit Jessie's online memorial page at http://www.hollandbonine.com to send a card or leave a message of condolence for her family.