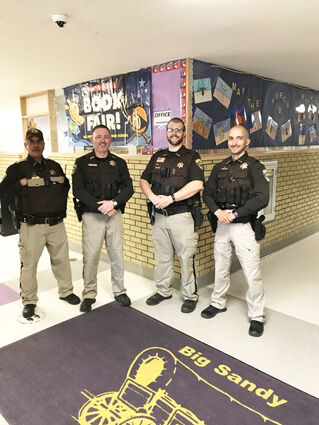 Last Thursday, Big Sandy Schools conducted its annual active shooter drills at the High School and at FE Miley Elementary. I subbed at the elementary school and was a part of the drills that morning. I will not be going into detail in this article regarding the specifics of the drill itself. However, I thought it would be interesting to offer some observations and experiences regarding the day itself.

For those who have not been in town for past active shooter drills, the entire drill is fairly elaborate and designed to prepare not just the students, but also the emergency service personnel. Typically, the drill involves ambulances, simulated injured students, emergency vehicles blocking off the streets surrounding the school, calls to dispatchers, and other occurrences that go far beyond the old "Duck and Cover" drills of the 50s or ordinary fire drills. It is a full on test drive of the entire emergency response for a school shooting. In years past, the drill has featured various elements to enhance the realism and prepare students. For example, the shooter gains access to the building through a door left open accidentally and fires blanks to prepare everyone for the shock and noise of an incident. The entire run through is designed to make kids safer in the event of the unthinkable. Due to various logistical constraints this year, a simpler version of the drill was run. Next year, the more elaborate program will resume.

The elementary school version of the drill is generally less realistic in the interest of not traumatizing the children with loud noises or other components of the High School drill. I sat in with Mrs. Keller's 4th grade class for the drill and was impressed at how seriously they took the entire thing. Kids discussed various aspects of the drill and asked thoughtful questions about what would happen when in a real shooter situation. The entire event took nearly an hour in total, and the students were engaged and pretty serious throughout. I spoke with several teachers who talked about how intensely students played their part in the drill, even growing irritable with peers who did not take the practice run seriously. The students I observed were serious and focused throughout the long drill, which was impressive considering how difficult it is to keep children quiet and on task for any length of time. They were also very upbeat and smiley throughout, which is an interesting contrast considering the seriousness of their behavior and the drill itself.

After the evacuation stage of the drill was complete, I listened as students and staff discussed different concerns they had about what to do in the event of a real life situation. They even discussed how to support a special needs peer who grew anxious during the drill. This was one of the most impressive things I witnessed. Afterward, I listened in as several teachers discussed the drill, conversing about the things they learned in the process of running through it, comparing notes about contacting emergency services, and their observations of the kids in the process. I have always been impressed by the dedication of our teachers, but I must say that the level of thought and commitment they showed to the drill and keeping the kids safe stood out.