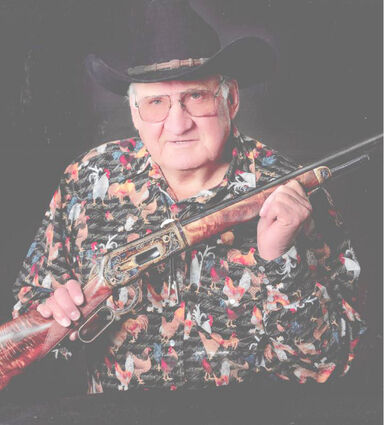 Local Cowboy and Master Engraver, Aaron "Duke" Pursley, passed away Wednesday, May 11, 2022 at the Big Sandy Medical Center of natural causes. Cremation has taken place and no services are planned at Duke's request.

Duke was born June 28, 1935 to James and Mildred (Rickert) Pursley in his grandparent's home at the foothills of Centennial a short distance from Big Sandy, Montana. He lived his entire life within a ten mile circle of his birthplace. Duke graduated from Big Sandy High School in 1954, and began a 12 year career as a Saddle Bronc rider. He loved the challenge of seemingly unrideable broncs and rode with style and flair. He married local girl, Dolly McNeil! on May 17, 1958 in Big Sandy, and they moved into the home he was born in, and off they went rodeoing all over the country and in Canada. Duke celebrated many rodeo successes in the PRCA, and suffered with a few broken bones alongthe way. Duke and Dolly enjoyed this lifestyle, met lots of great people, saw some beautiful country and began their family- Mike, Kip, Julie and Ted. About the time Mike was to start school, they moved their home to the Pursley Coulee on Coalmine Road and worked with his parents farming and ranching. With the help of family and friends they built a log kit home in that yard, later moving it to property they had purchased from his Uncle Milton Pursley at the base of Centennial, where Duke claimed his million dollar view. They lived in that log home for 50 years moving into Big Sandy in 2020. He enjoyed riding horses and raising cattle. He branded his cows and his artwork with his brand, A hanging P. If you have a piece of his work, you will find his brand somewhere on it with the year it was made.

Duke and his older brother Allan grew up in a creative home, their parents must have nurtured their artistic interests because they had many hobbies and both developed an artistic living. Duke in gun engraving and knifemaking and Allan in saddlemaking. When he was about 20, Duke taught himself to engrave with tools his dad made for him. He began creating custom knives in 1975, each one a unique piece of art. He continued to engrave guns and in 1986 reached Master Engraver recognition from the Firearms Engravers Guild of America and continued engraving up until the time of his death. There are about forty Master Engravers in the United States at this time. He loved creating unique pieces and designs, he loved taking a plain gun and making it spectacular. lifeis too short to shoot with an Ugly gun, and Duke's guns were anything but ugly. In 1992 Duke was proud to complete a College Course at Trinidad State College in gold inlay from Master Engraver, John Barraclough. This added another dimension to his already impressive style of engraving. Duke and Dolly traveled to Knife and Gun Shows all over the country selling his creations. They enjoyed shows in New York City, Las Vegas, Reno, Texas, California and throughout Montana. In 1996 Duke joined with his longtime friend Ron Otto and created the little Sharps Rifle Company to build a 20% smaller version of the original Sharps rifle. These rifles are a dream to shoot and Duke's engraving enhanced their charm.

Duke was inducted into the Montana Cowboy Hall of Fame in 2017 and enjoyed telling stories of his adventures, especially his hunting trips with his lifelong buddies. He was always on the move. He loved driving and traveled wherever he wanted, whenever he wanted. He'd take his side by side and head over the mountains taking a gun or two to shoot gophers and his fishing pole to try his luck in various ponds or creeks. He traveled with his friends to Alaska to fish, he hunted moose in northern Canada, loved to shoot gophers, coyotes and rattlesnakes. Duke loved to visit and over the years he made lots of friends, young and old. He especially enjoyed children and has been entertained in recent years by his grandchildren and great grandchildren.

Duke was a colorful character in more ways than one. He stood out in a crowd with his wild western shirts, that were all hand sewn with love and a smile by his wife, Dolly. Colorful Cowboy Slang rolled off his tongue during everyday conversation or at the slightest frustration. He will be greatly missed.

He was preceded in death by his parents, and one nephew, Wayne Pursley, in 1976.

Memorials can be made to the BigSandy Medical Center.