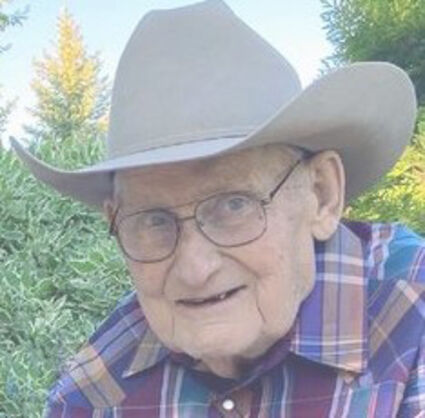 11 years and 15 days shy of achieving his goal of living to be 100 years old, Clarence Allan Pursley was called home to Jesus on July 1, 2022. He was born to James and Mildred (Rickert) Pursley on July 16, 1933. His childhood was filled with daring escapades with his brother, Aaron "Duke" Pursley on their family's ranch in Big Sandy, Montana. At times, the Pursley boys were a handful. From starting their Christmas tree on fire to dodging .22 rifle bullets as they ricocheted off rocks, the two were inseparable. In their later years, they were both loving husbands, fathers, grandfathers, and great-grandfathers, as well as being master craftsmen in their chosen careers. They were two peas in a pod and even in death the two were united, as Duke passed on May 11, 2022.

As a teenager and young adult, Allan continued to live an adventurous life, from accidentally driving into an electrical transformer that caused a major power outage spanning from Big Sandy to Havre, to being drafted into the army in 1954, where his occupation on his enlistment papers was cited as a "cow puncher." Subsequently, he served his country as a stateside radar specialist during the Korean War.

During his time in the military, he and Mary Ann Pfrimmer corresponded and to the dismay of two of her sisters, Allan and Ann wed on May 16, 1956. A year later, while working in a parts department in Havre, Allan welcomed his first daughter, Geri Lu and quickly instilled her love of rodeo and car racing, by taking her to both the first week of her life. A short 13 months later, Wayne Allan was born and spent the 17 years of his life filling Allan and Ann's home with love, adventure and some heartburn. One year to the day after Wayne was born, the Pursley family was completed with the birth of Norma Jean, who carried on her father's love of family, livestock and leather craftsmanship.

Allan worked various jobs throughout his early life, including a traveling salesman, as he sold cigarettes, sundries, and toys. In between his sales trips, Allan introduced his family to the "best sandwich" he had ever eaten on the road...a Rueben. He loved it so much, he recreated the delicious sandwich for them to enjoy along with his famous "cracker soup" – which consisted of crackers, butter, milk, salt and pepper. Allan loved making his kids poached eggs on toast with warm milk as well. Allan was a family man and caretaker for Ann and their children.

As the years continued, Allan and his family moved to Great Falls, where he went from his humble beginnings to a world-renowned saddle maker. Wanting to be self-taught, he tore down a ranch saddle in his family's kitchen and used the bathtub to soak leather. Needless to say, showers became a premium in the Pursley household.

In the early 1970s, he established Broken Arrow Saddlery with his longtime friend, Larry Haferman, by opening a small shop in Great Falls on 10th Avenue South in the Montana Mustard Seed Building, later to various locations throughout the city and eventually out to his property south of town. For several years Allan and Ann would travel to Arizona where he continued to build saddles during the winter months.

Honing his skills as a leather craftsman, and combining his love of rodeo, Allan took an interest in building bronc saddles. After all, his brother Duke rode saddle broncs in his early years and his son, Wayne was in the initial stages of becoming a bronc rider, so it was only natural that Allan supported his son in his endeavors by perfecting a bronc saddle.

In July of 1976, Wayne's life was cut short in a tragic plane accident. At the time, Allan's close friend, Bill Jacobs, who had lost his son earlier, told him not to give up and focus on the "youth" to heal his heart. And that is what he did. One of Allan's greatest times in his life was when he traveled with another of Bill's sons, Donald and their wives on the amateur and youth rodeo circuit with Jacobs Livestock and Rodeo working as a "gateman extraordinaire."

Not only were these men his customers, but they became his friends and family. His heart was full, knowing he played a small part in making these cowboys champions in their professional and personal lives.

Throughout his expansive career, Allan built over 1,000 saddles, chaps, wallets, belts, knife sheaths, rifle scabbards, memory books, and other one-of-a-kind pieces. His saddles not only included bronc saddles, but barrel racing saddles, ranch saddles, youth saddles, cutting and reining saddles, as well as adaptive saddles. They can be found in the United States, Canada, Mexico, Australia, and Germany.

During "66 years of bickering bliss," Allan and Ann's home welcomed many, especially those in the rodeo business. Together, they have countless "kids" that they love. A life value for Allan that continued until his passing was that guests were always welcomed and encouraged, because "you never know when they will have time to stop by for a visit again." They never met a stranger that did not become a friend or part of their family.

Allan was a mentor to many, especially his daughters, Geri and Norma, son-in-law Marty Graham, as well as his grandchildren, Willow and John Rossmiller,Colette and Joe Zielinski, Mahria Graham, and Travis Graham. His eyes continually lit up when he was surrounded by his great-grandchildren, Caleb, Andrew ,and Ruth Rossmiller, and Colten Graham-Sinclair. Each generation as well as many friends along the way have enjoyed learning the leather trade from Allan. Taking care of other people and animals first, being a hard worker, showing loyalty and honesty, and above all else, loving Jesus with your entire heart are values Allan encouraged and inspired in his family.

Allan's most important accomplishment and cherished moment of his life was when he accepted Jesus Christ as his personal lord and savior at a high school rodeo in Belt. His life's journey was filled with the many blessings and miracles of knowing Jesus. Allan loved to share his testimony of what the Lord brought him through and how God always had a plan. In the last days of his life, he said he wished he could reach everyone in the world and let them know how God works through others to care for us, and he was proof of God's love and plans for our lives.

The legacy of Allan's life lives on, not only in the saddles he built, but in the many lives he touched throughout the years. To say Allan was one in a million, is an understatement. He made each person he encountered feel like the only one that mattered, as he sat and visited with you about days gone by and things to come. He truly is a legend.

Allan will be deeply missed by all that knew him. Please remember him as you climb upon your horse, tell stories with those you love, and open your bible to spend time with God.

Never forget the Broken Arrow that pierced our hearts in such a loving way.

At Allan's request, his celebration of life is planned next year on what would be his 90th birthday, July 16, 2023.

Condolences for the family may be shared online at http://www.SchniderFuneralHome.com.