Hunter Moore "Volunteered" to be in Musical 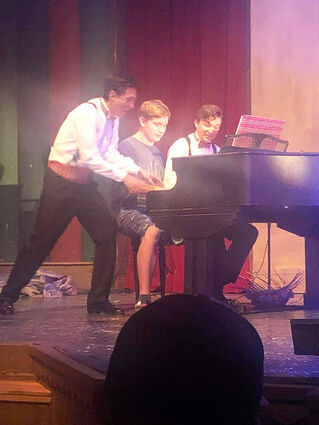 Big Sandy High School student, Hunter Moore, exercised his musical chops and stage presence last week while attending a musical theater production of Forever Plaid. Hunter was called on stage to play piano and dance as a part of the show. Hunter is an exceptionally talented member of the school band and choir.

The Moore family travels to Fort Peck every summer for vacation. "We went camping and then fishing. That's what we always do. And the first day we got there, we went to a play in the Fort Peck theater, like we always do when we get there."

The show is about four members of a singing group who die in a car crash. The quartet later takes the stage as ghosts in a nostalgic 50s musical. Hunter explains that, "...when the actors got back on stage, they said, 'Oh, the piano player isn't here. (He had gotten a phone call.) Guess we'll need someone else to play piano.' Then they start playing piano, and they're like, 'Hey, how many people know this song?' So then someone raises their hand."

Sheri Moore, Hunter's mother and the 3rd grade teacher at FE Miley, explained how her son "volunteered" to play piano. "They asked who could play "Heart and Soul" on the piano, and I volunteered Hunter by pointing to him behind his back. I was so surprised he agreed to go on stage, because he's usually so reserved. They wanted him to get up and dance, and he drew the line at that. They were trying to get him to do the moves with them."

Hunter took piano lessons for a few months, but has continued to teach himself afterward. "I can read music, but it just takes me a bit to put it on piano. I just played the melody part, which is easy, but it was scary." Hunter has a lot of experience on stage playing trumpet in the band and singing in the school choir. He is generally comfortable onstage, but tends to prefer to avoid attention. "It was fun. I guess it wasn't actually that scary once you get up there. You couldn't really see any of the people out there, but there's four guys on the stage. They were very energetic."

Sheri explained that her favorite part of her son's performance: "The best part was when the piano player put his head on his shoulder, and Hunter mouthed 'Help Me!" to the audience." The improvisation got laughs from the audience. Afterward, Hunter was approached by several audience members who praised his piano playing. One person told him it was the best part of the show.

Hunter has a great deal of musical talent, as anyone who has attended a school concert has seen. He also writes and records his own music using music software and posts it to his YouTube channel: "Browser1337." His recordings are electronic type music and are written with a video game soundtrack aesthetic.