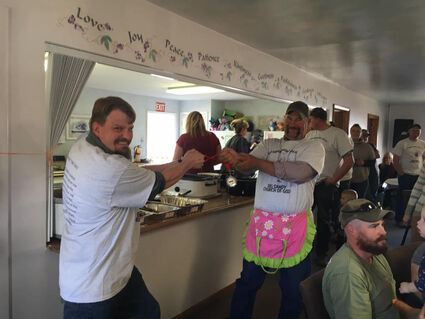 Big Sandy Church of God will be hosting its 11th annual Brisket Cook-Off September 25th. The barbecue will be served up to guests at 1 PM. Everyone is invited and the meal is free. Come out and join us for fun, fellowship, and the opportunity to vote in the people's choice competition for the best local brisket cook. We are also looking for competitors. We can currently accommodate 12 cooks in the competition.

The first cook-off, over a decade ago, started out as a bit of a joke between Brook Anderson and myself. He had won the Chouteau County Fair Brisket Cook-off that year. I had never smoked anything on my barbecue before. In fact, I had been a vegetarian for years until my family moved to Montana. I talked with Brook about doing a cook-off between the two of us for the youth group at the church. He was running the youth program at the time and agreed it was a fun idea. In an effort to build some interest and energy around the idea, we started trash-talking and teasing each other about the whole thing in the weeks leading up to it. Before long, other guys from the church began asking how they could get in on the fun. As we added competitors, the whole thing grew into the first Big Sandy Church of God Brisket Cook-Off. Brook and I maintained our light hearted rivalry through an annual bet. Between us, the loser had to wear a pink flowery apron every time we barbecued for a year until the next competition. I won the first few years, but lost the last year of his participation in the competition. Last year, I renewed the bet with Lance Rutledge, who beat me. I am looking forward to handing him the pretty pink apron this year after the judging is complete. (Yes, I did just call him out.)

Over the years, the competition has changed format and more cooks have been added. Steve Arnold, a former PA at the medical center, suggested the addition of other competitions. This prompted several side dish competitions (which I never managed to win) as well as the addition of a dessert contest. Desserts have been especially fun to judge and have added an extra layer to the post-cook off food coma that I've grown to enjoy immensely over the years. This year, the dessert contest will experience another evolution into a pie baking contest.

One of the biggest blessings we've had in doing this event, apart from having the neighbors over for a huge barbecue, has been the friendship and generosity of Jim Dumas. When he ran the meat shop in town, he donated briskets for the contests. He also participated as a judge. He blessed me this summer by providing the delicious smoked pork for my 10 Year Anniversary Party. This year, he will be providing the briskets again from his shop in Malta. He has been a good friend to me and our church and we have appreciated everything he has done to help pull off our little local barbecue cook-off.

The Brisket Cook-Off typically draws a couple hundred attendees every year, though weather and other factors seem to affect the turnout from year to year.

For more information on the cook-off or if you want to compete, reach out to me (Erik) at captain_erik@mac.com or by calling or texting me at 406-399-3803. If you have a beloved side dish you'd like to bring to show off, let me know. We look forward to seeing you at our barbecue contest, fun, and fellowship time later this month.