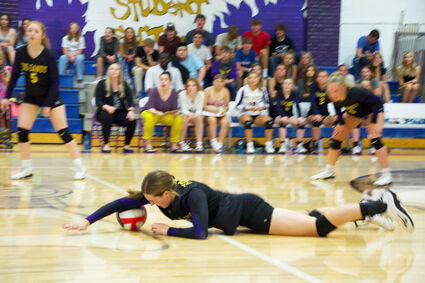 Senior, Angie Sant dives for the ball and runs into it.

The Big Sandy Volleyball team competed against Highwood and Box Elder last week. Although they played even with Highwood, they lost the game in four out of five (24-26, 25-20, 20-25, 25-23, 6-15). They had some impressive team stats with 94 digs and 31 kills. Individual Leaders: Digs: 22 - Eva Wagoner, Assists: 23 - Jai Baumann, Kills: 11 - Angie Sant, Blocks: 3 - Keira Galbavy, and Aces: 5 - Eva Wagoner. Coach McKenney said, "We lost a tight battle against Highwood this week. While I was happy to have taken them to 5 sets, I feel like we have some unfinished business. I think the girls will be able to learn from their mistakes, and I look forward to seeing Highwood again on October 8th. I have a feeling it's going to be an intense match!"

Coach McKenney said, "I was super proud of our Junior High this week. They won a close 5-set match against Highwood. Then, they played two best of three matches against Box Elder. They lost the first match but won

the second. The first set of the second match was 30-29, which was super exciting!"

"We won in 3 sets against Box Elder on Thursday night. This was a great confidence booster for the girls. It feels

good to have another conference win under our belt." 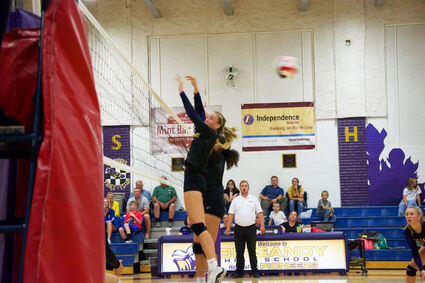 They will have a big week ahead of them this week. They played CJI on Tuesday night at the Big Sandy Gym. Coach McKenney was hoping to have a big crowd because she was sure it would be fun to watch!! There will be a doubleheader on Thursday night when they play Hays in Big Sandy.

When I'm at the matches, I keep thinking about my first experience with volleyball back when Serena played. The game consists of three to five sets before winning the match. The games were so slow when Serena played and weren't so talented. These games are fast and fun to watch. Because there are always three to five sets, not unlike basketball with four quarters, you can always enjoy the talent and leave when you need to. Come over and cheer them on. Experience the excitement.