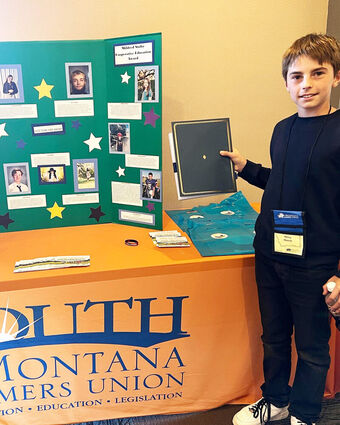 HELENA – Montana Farmers Union recently recognized several Montana youths for their dedication to agriculture and MFU education programs. The youth, along with several MFU members and Locals, were recognized during MFU's 107th Annual Convention held in Helena earlier this month.

To receive the award, youth must have completed at least three years of work in the senior youth leadership program, consisting of attending camp, serving as a camp dean, attending MFU events, and service in their community. They must also demonstrate their knowledge of cooperatives and Farmers Union history.

Several other youths and MFU members also were recognized during Convention.

Henry Merrill of Big Sandy, Denton Everhart from Great Falls, Reagan Aaberg of Conrad, and Lorelei Wakkinen from Dutton received the Mildred Stoltz Award for their positive attitude, kindness, good verbal skills and understanding of cooperative principles that they demonstrated during Junior Camp at Arrowpeak Camp this summer. They are four of nearly 200 campers who attended various programs at the facility this year. The winners received a commemorative camp photo and frame, $50, a one-year MFU membership and free camp registration for next year.

The 2023 scholarship program for graduating seniors, college students and non-traditional students opens for applications mid-November. More information can be found at montanafarmersunion.com.

Education is one of MFU's guiding principles – along with legislation and cooperation. As such, it is integral to MFU's programs, as well as MFU's support of youth ag education through participation in Ag in the Classroom, Farm to School, school visits, and through sponsoring and actively participating in youth-focused county-wide ag days around the state.

MFU also has longstanding relationships with FFA and 4-H through sponsorships, grants, and the opportunity to activate a free MFU membership for being a member of those organizations.

Members and local chapters who received awards for their dedication, involvement, and investment in driving the mission of Montana Farmers Union forward were:

• Tammy Copenhaver of Hingham for her involvement with planning the annual Women's Conference, as well as her willingness to serve on other MFU committees, including the Resolutions Committee;

• Charlotte Kelly of Chester for her longtime support of MFU's education efforts, specifically her dedication of time and resources to hold an annual day camp in Chester, as well as for her involvement in planning the annual Women's Conference;

• Teton Local for their efforts and support of the camp program with camperships; and