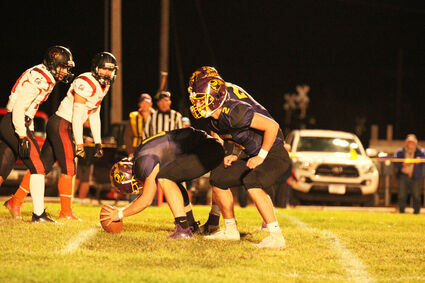 The Big Sandy Pioneers made quick work of the Savage Warriors on Friday night. Braydon Cline found Kody Strutz on a 50 yard bomb to set the Pioneers up in the redzone. Lane Demotiney would cash in on a short touchdown

Pass from Cline to finish off the opening drive. Ty Terry added two to the score with a completed kick to put the Pioneers up 8-0. Savage found some success on their opening drive until Lane Demontiney intercepted a pass that overflew the intended receiver. Big Sandy drove down the field but found themselves 4 yards out on fourth down. Braydon Cline lined up at running back and took the handoff for the fourth down score. With a 14 point lead the Pioneer defense forced a punt on Savage's next possession. Big Sandy would find the endzone again before the first quarter's end. Braydon Cline hit Kody Strutz on a short pass and Strutz would juke out the defender before taking it 50 yards for the score. After one quarter the Pioneers led 22-0. 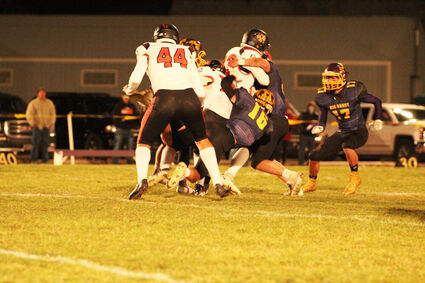 Big Sandy would continue to find success on offense even though sloppy play and penalties would force the Pioneers to work harder for their scores. Lance Rutledge would find the end zone after picking up a Strutz fumble near the goal line to make the score 30-0. Another stout defensive stand would result in a safety after Wylee Snapp and Braydon Cline sandwiched the Savage quarterback in the endzone. Cooper Taylor would return the kick back to the Warrior 10 yard line and Kody Strutz would punch it in on a 6 yard carry. The Pioneers now led 39-0, after Wylee Snapp would make an impressive catch to convert the extra point. The final score of the half would come on a ten yard grab by Rusty Gasvoda from "Big Time" Braydon Cline. The Pioneers would lead 47-0 at halftime.

The Pioneers would waste little time scoring in the third quarter. Lane Demotiney would make a stellar catch in the endzone for a 29 yard score. Ty Terry continued to complete the majority of his 2 point attempts and put the Pioneers up 55-0. The Savage Warriors would find the endzone on a long touchdown reception to make the score 55-6 late in the fourth quarter. Freshman Wes Cox would add a late score for Big Sandy to make the final score 61-6. The Pioneers will face the Custer-Hysham-Melstone Rebels in a quarterfinal matchup at home next Saturday at 1PM.