Pioneers Grapple in Choteau Results from the Choteau Classic 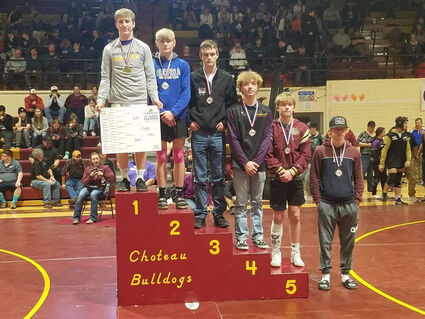 The Big Sandy Pioneers competed well at the Choteau Classic over the weekend. Quinn Rodewald continued to dominate on the mat with an impressive first period fall over Max Rosenthal of Florence in the semifinal round. In the championship match, Rodewald faced a familiar foe in Richard Schmidt of Cut Bank. Rodewald took Schmidt down twice during the match to earn a 4-1 decision win. This is the second tournament in a row that Quinn Rodewald has won wrestling at 103 pounds. 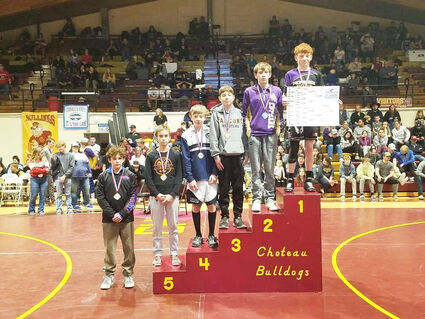 Senior Tannin Baumann competed well over the weekend earning a 4th place finish after pinning Seth Wilson of Florence in the consolation semifinals. Baumann lost 5-2 to Dane Hoover of Whitehall in the consolation finals. Sophomore Darrell Sunchild also placed 4th for the Pioneers, wrestling in the heavyweight division. Sunchild pinned Ryan Simpson of Shelby to advance into the 3rd place match, where he would fall to Anaconda grappler Aiden Miller.

Wes Cox narrowly missed out on placing after falling 3-2 to Nathan Close of Bigfork in the 132 pound bracket. Cox had a record of 4-2 over the course of the weekend. Sam Cox finished the weekend with two victories over Ronald Grant of Shelby. Cox has battled well for the Pioneers at the 205 pound weight class. Leah LePinnet missed out on placing but continued to wrestle tough for the Big Sandy team. The Pioneers will wrestle in Chinook on Friday and Harlem on Saturday.