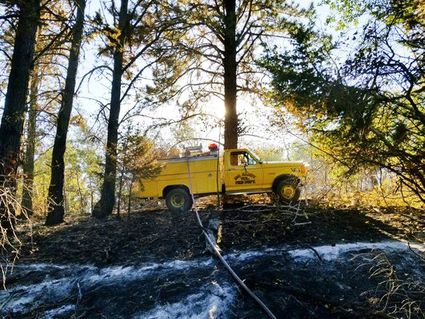 The 62nd Annual Chili Feed will be held at the Fire Department Friday, September 29 starting at 4pm.

The annual Chili Feeds are the only source of income for the all volunteer Big Sandy Fire Department except for funding for some projects that is shared with the Lippard-Clawiter Foundation.

Started by the Fire Department in 1955 Fire Chief Larry Ophus' father was one of the founding members of this huge fund raising event.

Fund raising has grown while Big Sandy has stayed about the same. The first Chili Feed Fund Raiser raised $350.00. Compare that with last year when twenty thousand dollars was raised.

It is all because of a very giving community who knows the value of an all Volunteer Fire Department and Big Sandy Ambulance Service.

Not only does the Chili Feed keep the Fire Department going but it also acts as a high school homecoming.

Chief Ophus says he sees many people who return for the Chili Feed and participate in the annual home football game and attend volleyball too if there are games scheduled that weekend.

In no uncertain terms, people just seeing each other after a long hot summer or people going for homecoming festivities, contribute a whole lot of money to the Volunteer Fire Department.

So, what does that money all go for?

Take this year for example. The Fire Department found out that their "Jaws of Life" was outdated. So the Fire Department is working on updating that piece of equipment to the tune of around forty two thousand dollars. That includes a new Jaws of Life spreader, cutter and hydraulic ram to go with it.

Also, the Fire Department is putting together a new Type 3 Wildfire Fire Truck. That will be in the works later this year and will cost around eighty thousand dollars and will be geared to putting out wildfires. It will be a 4X4 on probably a ½ ton chassis.

After the East Fork Fire in the Bear Paw Mountains, a need for this new wildfire truck was surely shown. According to Chief Ophus the Big Sandy Volunteer Fire Department spent nine days fighting the East Fork fire.

So, this Friday there is a Chili Feed at the Fire Hall. Each fireman is expected to bring a vat of his own special chili and the IX Ranch is donating beef for a lot of hamburger patties to go with the chili.

There will be hot dogs, Polish Dogs, pop, chips and condiments to go with the chili.

Throughout the evening there will be items raffled off which should downright fun and very useful for a number of reasons. Raffle items are as follows:

Gasvoda and Son donated 2 half beefs

The raffles are a lot of fun and it is a great chance to win some valuable food and merchandise.

As usual, there will be free fire truck rides for kids.

Fire Chief Larry Ophus pointed out that the Big Sandy Fire Department was able to replace all the asphalt around the fire hall this year which will make for an even better Chili Feed.

Don't miss it. Say hi to your neighbors and help keep the Big Sandy area safe.